After rising from the dead it seems that Shesus has a problem. While she was stuck in her tomb, some man has been running around Jerusalem telling everybody that he is the son of God. It is now up to her to set the record straight that she is, in fact, God's only child. But in order to do it she is going to have to track down this Jesus guy. Fortunately, she knows just where to start. The name Mary Magdalene seems to be on the lips of all the citizens of Jerusalem. 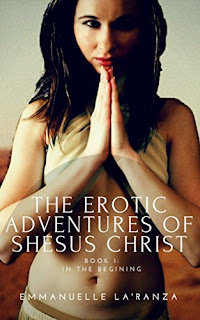 The story opens with Shesus waking in the darkness of the cave, a little perturbed that she's been dead for three days and nobody has come to check up on her. Moving the stone boulder to orchestrate her escape should have been impossible, "But Shesus had just risen from the dead, impossible was now kind of her thing." The first thing she does upon exiting the cave is stroll into Jerusalem and pull off a wet t-shirt kind of show for a group of gawking men. Just when you start to think this is going to be one of those kinds of stories, though, they all tell her some imposter named Jesus has already risen, and nobody needs to hear her story.

Determine to track down this imposter, she attempts to ask a woman where he might have gone, but is rudely interrupted by the woman's husband. It is here that the story shows its true colours, with Shesus physically dominating and humiliating the man for clearly having beaten his wife, and then treating the cowed woman as an equal, giving her back strength and dignity. The encounter with Mary Magdalene is where the real story lies, though, freeing her from the patriarchy's lies about chastity and purity, acknowledging sex for pleasure's sake, and not only validating her desires, but inviting "woman to lay with woman as God intended."

The WTF Weekend gang is group of readers and reviewers who enjoy Weird, Taboo, and Forbidden fiction that is most definitely NSFW. Join us every Saturday and Sunday for more twisted tales . . . and if you have a review to contribute, please contact us!
blasphemy book review-WTF Emmanuelle La'Ranza erotica lgbt