on October 26, 2017
I love ghost stories. In part I blame being obsessed with the TV show Dark Shadows when I was a pre-schooler, and then graduating to Night Gallery, Tales from the Crypt and Twilight Zone. I read my first book of regional ghost stories when I was younger than ten, and re-read it until the cover fell off.

Unlike a lot of people I know, I’ve never seen a ghost. I believe other people have seen things they can’t explain and that we don’t understand, but it hasn’t happened to me. I’m not sure whether to feel relieved or excluded. It certainly hasn’t been for lack of being in haunted places.

Ghost stories fascinate me as an author because they’re always about unfinished business. Lore holds that there are two basic kinds of haunts: ‘stone-tape recordings’ and sentient spirits. The ‘stone-tape’ or ‘repeater’ hauntings suggest energy patterns on an endless repeating loop but not consciousness. This would be the spirit that’s seen walking through a hotel ballroom and out through the wall, but who never interacts with anyone or changes what happens. The sentient spirits are thought to retain some memory of who they were and why they stayed behind. Usually, it’s to right a wrong or take care of something important—like protecting a loved one, catching a killer, exposing a thief. 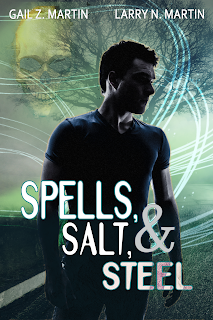 I’ve used both kinds of ghosts in my books. A character who is able to see ghosts would likely be able to see both the repeaters and the sentients, but a medium wouldn’t get anything out of a repeater at a seance because there isn’t any consciousness left behind. So when we read stories about spirits sending messages from beyond the grave, Ouija boards, poltergeists and seances, those are the sentient spirits, who have some degree of agency, and may choose to ‘go into the light’ when their task is finished.

Ghost stories are mysteries because there’s usually a secret involved, or a betrayal. A hidden truth lurks in the shadows, and the ghost won’t be free until it’s uncovered. It’s also a testimony to the strength of human will that some people won’t let go of what’s important even after death. And for an author, that’s like catnip.

Which is why with all my ongoing and upcoming series, you can expect to see more ghosts—because good stories don’t have to end with death.

Days of the Death Tour & Giveaway

My Days of the Dead blog tour runs through October 31 with brand new excerpts from upcoming books and recent short stories, interviews, guest blog posts, giveaways and more! Plus, I’ll be including extra excerpt links for my stories and for books by author friends of mine. You’ve got to visit the participating sites to get the goodies, just like Trick or Treat! Get all the details about my Days of the Dead blog tour here:

Let me give a shout-out for #HoldOnToTheLight 2017, back for more with new authors and fantastic new posts! 130+ Sci-Fi/Fantasy authors blogging about their personal struggles with depression, PTSD, anxiety, suicide and self-harm, candid posts by some of your favorite authors on how mental health issues have impacted their lives and books. Read the stories, share the stories, change a life. Find out more at www.HoldOnToTheLight.com

Book Swag is the new Trick-or-Treat! All of my guest blog posts have links to free excerpts—grab them all!

A Rafflecopter giveaway contest—enter for a chance to win a copy of Spells, Salt and Steel! 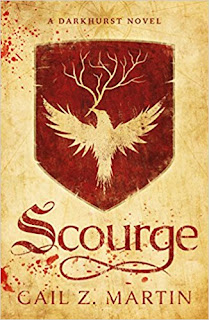 Here’s a free excerpt from my friend Jean Marie Ward’s story Cooking Up a Storm from Tales From the Vatican Vaults: