on August 07, 2019
"Waiting On" Wednesday is a weekly event, originally hosted by Jill over at Breaking the Spine, that spotlights upcoming releases that we're eagerly anticipating. Since Jill is no longer hosting it, I'm joining Can’t Wait Wednesday movement over at Wishful Endings. 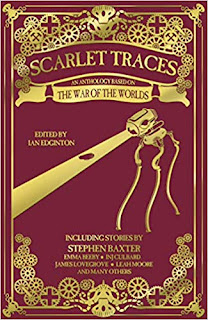 A thrilling, timely anthology of short fictions set after the events of HG Wells’ War of the Worlds in beautiful limited edition foil-and-cloth-bound hardcover!

It is the dawn of the twentieth century. Following the Martians’ failed invasion of Earth, the British Empire has seized their technology and unlocked its secrets for themselves, rolling out new machines and ever more deadly weapons in their quest for dominance.


I'm a sucker for new takes on the alien invasion classic, and this would be worth reading for Baxter and Lovegrove alone.
aliens Ian Edginton sci-fi steampunk Waiting On Wednesday