Can’t Wait Wednesday - The Seared Lands by Deborah A. Wolf

on July 24, 2019
"Waiting On" Wednesday is a weekly event, originally hosted by Jill over at Breaking the Spine, that spotlights upcoming releases that we're eagerly anticipating. Since Jill is no longer hosting it, I'm joining Can’t Wait Wednesday movement over at Wishful Endings. 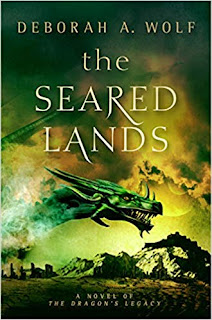 The Seared Lands by Deborah A. Wolf
Expected publication: September 10th 2019 by Titan

This book, while following the previous stories, focuses a great deal on the Illindrist, Aasah, and his apprentice Yaela, strange people with stranger powers who come from a land of salt and fire.

In the days of the Sundering, Quarabala--the Seared Lands--were cursed by Akari Sun Dragon and scorched beyond all recognition. Now a cruel place inhabited by nightmare beasts, the Seared Lands are home to a desperate few; and as fears of a second Sundering grow, these people look to greener lands. If no place is found for them, they will seize new lands from the soft hands of Those Who Dwell Above.

They have nowhere else to go, they have nothing to lose...

And this time, they are not alone.


I called The Dragon's Legacy "one of the finest epic fantasies I have ever had the privilege of reading," and the only reason I've held off on The Forbidden City is because I knew this was coming. So, look for back-to-back reviews coming soon!
Deborah A. Wolf epic fantasy Waiting On Wednesday