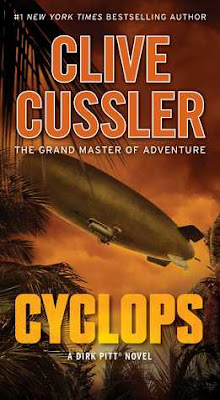 A wealthy American financier disappears on a treasure hunt in an antique blimp. Okay, that sounds cool.

From Cuban waters, the blimp drifts toward Florida with a crew of dead men—Soviet cosmonauts. Whoa, now you've got my attention.

Dirk Pitt discovers a shocking scheme: a covert group of US industrialists has put a colony on the moon, a secret base they will defend at any cost. You've got to be shitting me!

Threatened in space, the Russians are about to strike a savage blow in Cuba—and only NUMA’s Dirk Pitt can stop them. This sounds awesome!

Cyclops was a thoroughly enjoyable read, as cheesy and as far-fetched as Cussler got during Pitt's early days, but that's hardly a complaint. This is a vintage 80s thriller that I've only discovered because of the new edition, and that cover blurb sold me immediately. I didn't care if it was a republished classic or a new throwback, but I had to read it. No question.

As I read through this, one word kept coming to mind - Moonraker - and that's a good thing. If you remember Bond's most preposterous mission as fondly as I do, then this is the book for you. All that Cold War paranoia, American/Russian/Cuban politics, Space Shuttle excitement, macho sexism, and cartoon violence is here in spades. I loved the idea of a secret USA moonbase that not even the President knows about, and the high-stakes plan to assassinate Castro, destroy Cuba, and frame the CIA was just preposterous enough to be entertaining. Throw in an antique blimp that's as a clever plot-point as it is self-indulgent, and you've got the makings of a kick-ass adventure.

Personally, I would have liked more Space Shuttle action, but given that this hit shelves not long after the Challenger disaster, I'm surprised it was published as-is. The threat of a fatal crash is key to the book's final act, and that had to have made for an awkward read at the time.

Anyway, as much as I loved the Shuttle angle, I would have trimmed the final story arc, as it strays too far into politics, at the expense of the treasure hunt that began it all but, otherwise, Cyclops delivered exactly what I was looking for.