Top Ten Tuesday: Most Anticipated Releases of the Second Half of 2019

on June 18, 2019
Top Ten Tuesday was created by The Broke and the Bookish and is now hosted by Jana at That Artsy Reader Girl. It is a meme born of a love of lists, a love of books, and a desire to bring bookish friends together.

This week we're looking at our Most Anticipated Releases of the Second Half of 2019. It's hard to pick just 10 books, so I'm going with those upcoming releases I already have in-hand, waiting anxiously for their turn.

1. The Wolf's Call by Anthony Ryan [July 23rd]
A thrilling new story of razor-sharp action and epic adventure fueled by rumors of an army called the Steel Horde, led by a man who believes himself a god. Come on, that sounds cool!

2. The Gossamer Mage by Julie E. Czerneda [August 6th]
No, it's not the next book of her Night's Edge epic fantasy series (although there is a novella coming later this year), but how can you not get excited for a one mage standing alone against a Deathless Goddess who controls all magic?

3. The Mage-Fire War by L.E. Modesitt Jr. [August 13th]
A new Recluce novel is always cause to celebrate, but having a conclusion to the trilogy that began with The Mongrel Mage and Outcasts of Order is even better.

4. Old Bones by Douglas Preston & Lincoln Child [August 20th]
Preston & Child delve into history and archaeology with Agent Pendergast's protege, Corrie Swanson, in what is slated to be the first of a new series. Count me in!

5. Turning Darkness Into Light by Marie Brennan [August 20th]
I'm a latecomer to the Natural History of Dragons, so having a standalone entry into Brennan's world is not just timely, but welcome.

6. The Harp of Kings by Juliet Marillier [September 3rd]
A quest for an ancient symbol of kingship, plotting courtiers, tight-lipped druids, insightful storytellers, and Otherworld powers sound interesting, but what hooked me here was the talk of ambition clashing with conscience and heart-breaking decisions.

7. Gideon the Ninth by Tamsyn Muir [September 10th]
The Emperor needs necromancers. The Ninth Necromancer needs a swordswoman. Gideon has a sword, some dirty magazines, and no more time for undead nonsense. Enough said!

8. The Name of All Things by Jenn Lyons [October 29th]
The Ruin of Kings was a surprise arrival in the mail earlier this year, and it absolutely blew me away. It was one of best epic fantasies of the year, and after that ending . . . well, I'm anxious to find out what the hell happens next!

9. Fate of the Fallen by Kel Kade [November 5th]
Not all stories have happy endings. The going gets rough and folks start to believe their best chance for survival is to surrender to the forces of evil, which isn’t how the prophecy goes. Those two lines, right there, make this a must-read.

10. A Queen in Hiding by Sarah Kozloff [January 21st]
Yes, I do know January does not count as the second half of this year, but I have a copy of this in hand, and I will read it in 2019, so it counts. A breathtaking and cinematic epic fantasy sounds interesting enough, but what really caught my eye is the plan to release all four books within a month of each other. Binge away! 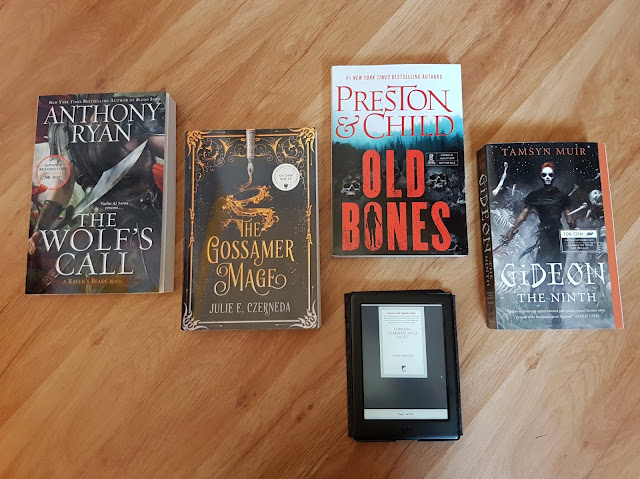 I could, of course, do a whole other Top Ten list of books I want to read but don't have in-hand yet, but we'll save that for another day.
epic fantasy thriller Top Ten Tuesday