When Zombie Tramp comes across flyers for an annual Easter event called “Bunnyland”, she figures it’s a good spot to have some twisted fun. But instead of hiding eggs and doling out chocolate, its more like Pagan sacrifice and giant wicker rabbits!

Join creator Dan Mendoza for the all new adventures of the cult hit series featuring his undead anti-hero, Zombie Tramp, now brought to life by the amazing talents of new superstar artist, TMChu. 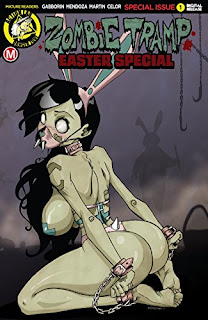 Damn, but this was a whole Hell of a lot of fun. I mean, the zombie Jesus thing has been done to death, but here the focus is less on the Christian aspects of the holiday and more on their Pagan origins. It all starts with our zombie witch heroine walking out of The Wicker Man, complaining about Nicholas Cage, and if you don't expect that movie's imagery to get resurrected later on, then you're probably reading the wrong comic. In fact, there are quite a few pop culture easter eggs buried here, with my favorite being the callback to Roddy Piper's infamous line from They Live, and that's only part of the fun.

There's some mind control to be found at the Quaker country festival, a little cannibalism, a creepy old dude, and a lot of human sacrifice. Bunny costumes are encouraged, although Zombie Tramp's take on the Playboy Bunny is not what they had in mind. Just about everything you might expect of the festival is perverted, from the colouring of eggs to the hiding of them - and that is an image you won't soon forget, especially after Zombie Tramp claims her egg. While it's hard to do anything special or revolutionary with the Wicker Man aspect, her escape from the burning effigy is one of the darkest, funniest things I've encountered in a comic in a long time.

Finally, while the Zombie Tramp Easter Special is very much a perverted take on the pagan festival of Easter, there is one bit of Christian imagery at the end that was a total (but entirely welcome) surprise. Of course, a comic is more than just its story, so I'd be remiss if I didn't call out the fantastic artwork, the clever lettering, and the effective use of coloring to set each scene.