on April 17, 2019
"Waiting On" Wednesday is a weekly event, originally hosted by Jill over at Breaking the Spine, that spotlights upcoming releases that we're eagerly anticipating. Since Jill is no longer hosting it, I'm joining Can’t Wait Wednesday movement over at Wishful Endings. 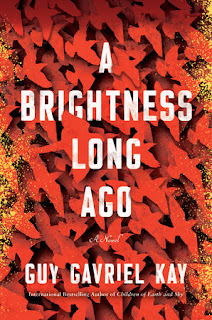 A Brightness Long Ago by Guy Gavriel Kay
Expected publication: May 14, 2019 by Viking

From the internationally bestselling author of Tigana and The Lions of Al-Rassan comes a masterful new novel set in a vivid world evoking early Renaissance Italy and offering an extraordinary cast of characters whose lives come together through destiny, love, and ambition.

In a chamber overlooking the nighttime waterways of a maritime city, a man recalls his youth and the people who shaped his life. Danio Cerra's intelligence won him entry to a renowned school even though he was only the son of a tailor. He took service at the court of a count--and soon learned why that man was known as the Beast.

Danio's fate changed the moment he recognized Adria Ripoli as she entered the Beast's chambers one autumn night, intending to kill. Born to power, Adria had chosen, instead of a life of comfort, one of danger--and freedom. Which is how she encounters Danio in a perilous time and place.

Unforgettable figures share the unfolding story. Among them: a healer determined to defy her expected lot; a charming, frivolous son of immense wealth; a powerful religious leader more decadent than devout; and, affecting all these lives and many more, two larger-than-life mercenary commanders, lifelong adversaries, whose rivalry puts a world in the balance.

A Brightness Long Ago offers both compelling drama and deeply moving reflections on the nature of memory, the choices we make in life, and the role played by the turning of Fortune's wheel.


I first teased this in August of last year, and got a chance at an early review back in November (I'll be re-posting it soon, in case you missed it), but I'll just say it again - Guy Gavriel Kay is finest voice in Canadian fantasy, and one of the finest voices in literature, so anything he writes is worth waiting for.
Canadian Guy Gavriel Kay historical fantasy Waiting On Wednesday