on March 27, 2019
"Waiting On" Wednesday is a weekly event, originally hosted by Jill over at Breaking the Spine, that spotlights upcoming releases that we're eagerly anticipating. Since Jill is no longer hosting it, I'm joining Can’t Wait Wednesday movement over at Wishful Endings. 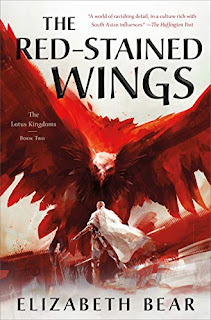 The Red-Stained Wings by Elizabeth Bear
Expected publication: May 28th 2019 by Tor Books

Hugo Award–winning author Elizabeth Bear returns to the epic fantasy world of the Lotus Kingdoms with The Red-Stained Wings, the sequel to The Stone in the Skull, taking the Gage into desert lands under a deadly sky to answer the riddle of the Stone in the Skull.

Elizabeth Bear created her secondary world of the Eternal Sky in her highly praised novel The Range of Ghosts and its sequels.


Elizabeth Bear is an amazing writer, full of as much talent as imagination, and I'm eager to catch up with this series.
Elizabeth Bear epic fantasy Waiting On Wednesday