Santa Claus is coming to town...at least, that was the plan, but now his elves have started going missing, kidnapped by some insidious figure in a black cloak, and despite the magic swirling about the place, the toys aren't going to put themselves together. So begins a terrifying game of cat and mouse as Kris Kringle searches The Land of Christmas for his abducted minions, unaware that he is to play an integral part in his foe's plans.

Krampus is pissed at Santa after lending him his snowblower and never getting it back. His punishment? To build a Human Santapede long enough to stretch around The Land of Christmas, and at its helm, the jolly fat man himself. Can Santa - aided by his best foreman, Finklefoot - get his elves back, defeat Krampus, and save Christmas before it is too late, or will Krampus succeed in creating the ghastliest single-file organism the North Pole has ever seen?

Ho-Ho-Holy Shit, things are about to get messy... 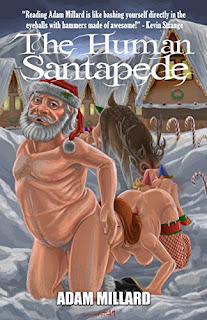 Maybe this was stronger, more shocking read when it was released 4 years ago, but even that was already 5 years removed from the first Human Centipede movie. Don't get me wrong, The Human Santapede had its moments, and could have been a thoroughly entertaining short story, but as a nearly 200-page novella, it just feels unnecessarily padded.

On the positive side, Adam Millard has a way with puns, a talent for twisting holiday tropes, and a flair for skewering pop culture icons. There were multiple points in the book where I laughed out loud, and even more where I groaned aloud . . . but with a smile. Particularly memorable moments for me were the bits about who/what Santa's elves really are (and how exile means being reduced to George Lucas movies with Warwick Davis), the complexities of joining a reindeer head to an elf's ass (spoiler alert, the antlers dig deep), and the asides about well-intentioned gifts gone awry (such as Stephanie Meyer's first typewriter).

On the negative side, there are a lot of racist jokes (Mexicans and the Irish get the brunt of it), characters seem to come and go for no other reason than to set up a punchline, and while it overindulges in gross comedy, it never really does more than scratch the surface of the source material's gross horror . . . and it leaves most of its fetish-fuel lying around, teased but unsatisfied.

The Human Santapede isn't a bad read, it's just a tad too long, wearing out its welcome before the final punchline. 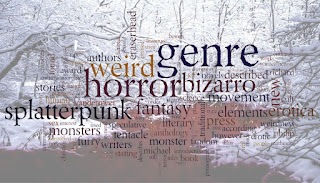 The WTF Weekend gang is group of readers and reviewers who enjoy Weird, Taboo, and Forbidden fiction that is most definitely NSFW. Normally posting on Saturday and Sunday, we've broken out to celebrate the holidays in twisted style!
Adam Millard bizarro book review WTF WTH Holidays