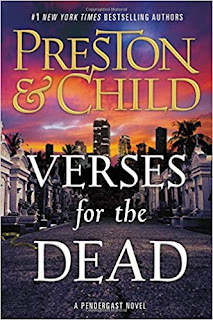 With Verses for the Dead, the 18th novel in the Agent Pendergast series, Douglas Preston & Lincoln Child continue the soft reset they began in City of Endless Night. Once again it's a standalone story, one that only touches on the wider mythology, completely devoid of any monstrous themes or supernatural elements . . . and which introduces the twist of a new Director, uncomfortable with Pendergast's methods, and a new partner.

The introduction of a new character can often be uncomfortable, upsetting the chemistry with which readers have become familiar, but Agent Coldmoon is a welcome addition. In watching him work side-by-side with Pendergast, not just observing but questioning his methods, we get an immediately interesting new point-of-view. His wonder, his bewilderment, and even his frustration is something we share, but Coldmoon is more than that. He has a not-so-secret agenda that casts a pall over the story, but he ultimately proves himself to be a capable agent and a loyal partner.

There is also a young forensic coroner introduced who adds an interesting new dynamic to the story. Her conflict with her boss allows Pendergast to demonstrate that, after all his suffering, he has once again found the calm, polite, respectful temperament of a Southern gentleman, but it also allows him the opportunity to prove he is not a man to be trifled with. The way Fauchet admires him, somewhere between romantic attraction and platonic hero worship, is a nice touch, and even her enthusiasm in the later chapters isn't enough to cast a shadow over her role.

As for the story, it's a relatively simple one compared to other outings, but still fascinating. What we have a serial killer who murders women in busy areas, where the risk of discovery is greatest, who takes the time to remove their hearts - and then deposits them on the graves of suicides, along with a literary-themed note. Why he does it, and what the connection is between victims, both past and present, is the mystery that drives the book. I had a light-bulb moment about two-thirds of the way through, figuring I had it solved, but the ultimate solution was darker and more complicated than I had anticipated. There are some great set pieces along the way, making great use of not just the state of Florida but a few other locations, and the swampy climax is one of their strongest to date.


Disclaimer: I received a complimentary ARC of this title from the publisher. This does not in any way affect the honesty or sincerity of my review.
book review Douglas Preston Lincoln Child thriller