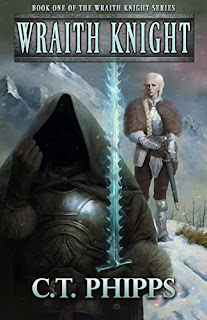 I cut my genre teeth on epic fantasies from the likes of Weis and Hickman, heroic fantasies from Howard and Leiber, and the anti-heroes of Moorcock and Donaldson. They were my first, and they are the kind of books I return to when I'm seeking escape. There aren't a lot of authors who write fantasy like that anymore, big books full of magic, monsters, wonder, and warriors, which is a big part of what makes Wraith Knight so exciting.

C.T. Phipps opens the book with a Hero of the ages, cut down in the Final Battle, and unwillingly resurrected as a Monster. It's like diving into an epic fantasy by reading the epilogue first, and then plunging headlong into the sequel. It hooked me from the first page, and the moment Regina appeared on the scene, leading to a ride on the animated corpse of an undead dragon, I knew I'd found one of those books I was looking for.

This is a book marked by fantastic world-building, with a history and mythology that are almost as deep as the story itself, and a cast of characters who are a tad clichéd, ridiculously powerful, and (most importantly) a ton of fun to read about. Jacob, Regina, and Serah are a great leading trio, inappropriately amusing at times, oddly romantic at others, and always exciting. The pacing  is absolutely breakneck, racing from one conflict to another; and full of philosophical themes of good versus evil that are more complex, more complicated than you might expect of a fantasy. I liked the portrayal of the King Below, and I was surprised by how the Lawgiver came to be portrayed.

There is no doubt that, morally and ethically, this has elements of grimdark fantasy, but to categorize it as such would be to do it, and Phipps, a disservice. He's blended genres before, most notably with Cthulhu Armageddon, but there the story was more about overlaying different shades of darkness. Here, it's about shifting tone, making it brighter than the subject matter sometimes warrants, and balancing moments of humor and wonder. Phipps makes you remember what it means to want to escape into a fantasy. He understands that you can love characters like Raistlin Majere and Elric of Melniboné, and still root for Tasslehoff Burrfoot and Moonglum of Elwher, without sacrificing the greater stakes of the story.

It's that mix, that diversity of tone, that honoring of the genre's roots while acknowledging his contemporaries, that makes Wraith Knight far more than just the sum of its parts. This is one of those books where you need to add the paperback to your shelf so you can revisit scenes and shared with friends. It's also a book that leaves you craving more - a trilogy, a saga, whatever it takes to reunite us with the world and its characters.


Disclaimer: I received a complimentary copy of this title from the author. This does not in any way affect the honesty or sincerity of my review.
book review C.T. Phipps epic fantasy