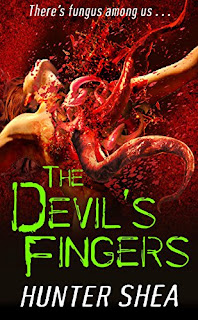 A slice of old-school horror that could have been plucked from an early Stephen King collection, The Devil's Fingers is dark, twisted, and gleefully cruel. Hunter Shea keeps the narrative tight, focusing on the fracturing friendship of a small group, deep in the woods, but teases fears of a far broader scope.

Perhaps the most frightening aspect of the story is the fact that clathrus archeri (devil's fingers) is a very real fungus . . . which most certainly does sprout tentacles from its egg-like growth . . . and which absolutely does smell like rotting flesh. To date, it has not been known to infect people the way it does here, but one might speculate that it is just a matter of time.

The fungus is half the horror here, especially with the way in which it infects its human hosts, but the other half is the mounting madness and the desperate fight for survival among the friends. We're talking claustrophobic, conspiracy-laded horror, with friends and lovers turning on one another with increasing violence. Hopeless and helpless, this feels like an apocalyptic tale from which no one is destined to emerge alive.

I suspect the ending may be somewhat polarizing for readers, especially those who want answers, who need all the loose ends tied up, but I loved how The Devil's Fingers just sort of stops with one final twist. It's cruel, either sad or chilling depending on your point of view, and we really never do know why it happened, or what happens next.


Disclaimer: I received a complimentary ARC of this title from the publisher. This does not in any way affect the honesty or sincerity of my review.
book review horror Hunter Shea