Gabriel, a Catholic priest, has been called upon the church to investigate a convent where the nuns are rumored to partake in demon worship. Unfortunately, this convent happens to be the very same one where the object of his desires, Anna, has joined. Along with his friend and fellow priest, Hector, as well as two of his parishioners, Gabriel sets out for the convent—only to end up in BIG trouble. It turns out, the nuns aren't just worshipping demons—they're becoming demonic futas, too! And these futas plan on feminizing these two priests and including them in their kinky rituals! 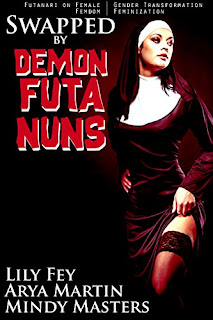 Not only does it make the eventual descent into depravity that much more entertaining, but the amount of narrative detail catapults it from taboo to truly blasphemous.

Gabriel and Hector, the pair of Catholic priests sent to investigate the convent are well-developed characters with a shared history. They are pious and dedicated, but Gabriel has flaws that make him easy to relate to. Roderick and Peter are surprisingly well-developed for a pair of side characters we don't expect to survive long, but they have some surprising roles to play.

The first half of the story is all plot, all characterization, setting up the priests and the nuns, and establishing the mystery of the convent. It's clear there's something wrong going on, especially once Gabriel finds the demonic tome in the convent's library, but the story does a nice job of building the mystery. The first real proof of sin that we see is the seduction of young Peter by the Reverend Mother, but once Gabriel witnesses the nuns growing magic penises, calling on Asmodeus as their Master, things escalate quickly. The story gets dark fast, embracing the demonic, and forcing both priests to betray their vows. The occult elements are more than just window dressing too, with the summoning rituals and transformations detailed nicely.

As for the climax, let me leave you three words - Whore of Babylon - and, yeah, that means just about everything you might hope (or fear).

The WTF Weekend gang is group of readers and reviewers who enjoy Weird, Taboo, and Forbidden fiction that is most definitely NSFW. Join us every Saturday and Sunday for more twisted tales . . . and if you have a review to contribute, please contact us!
Arya Martin blasphemy book review-WTF futa Lily Fey Mindy Masters monster erotica trans WTF