Futanari have become known to the world, accepted as the evolution of humans. Not man, not woman, but both… futa. The convent is where rich young ladies with the possibility of transitioning into futanari go to learn, to wait, to appreciate what such a change will entail.

The convent is run by Mother Superior Diavola. A mature futa, wise in the ways of the world, she prepares the young women to take their place in society. A place to advance the third sex into the highest reaches of culture.

Into this world comes Jessica. Anxious to change, eager to learn. Will she become the latest futanari? Or will she remain just female. 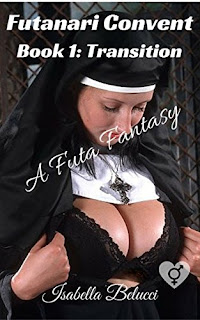 Damn. This was a fantastic story, with an incredible amount of detail in establishing the kinky scenario and the blasphemous setting. My only real complaint is that it is too short, especially in the second part.

With Futanari Convent Book 1: Transition, Isabella Belucci introduces us to an alternate timeline where futanari have not only become the next stage in human evolution, but have become an accepted, integrated part of society. Young women with the right DNA anxiously await their 25th birthday to see if they will transform into sexually charged superiority.

What makes this such a fitting choice for our Hell for the Holidays theme is the ways Belucci has sexualized the setting, the costumes, and the practices of a traditional convent, turning it into a safe place for these young women to be guided through their transformation. Those little details are absolutely glorious, from the black latex fetishized nun's outfits, to the rosary beads with the futa symbol pendants, to the futanari commandments, to the whole new level of worship required of a true Mother Superior. It is all sex-positive and gender-positive, a perversion that enhances the trappings of faith rather than condemns them (although purists will still find cause to be offended). 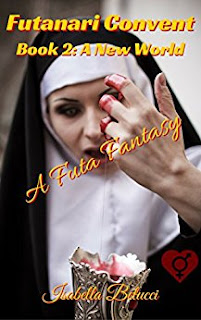 Futanari Convent Book 2: A New World opens with that pivotal birthday, a day that seems disappointingly like any other, sending Jessica to bed with a heavy heart and pains in her stomach. Those pains only get worse, until she passes out from exhaustion. Minor spoiler, perhaps, but if you did not expect her to wake up futa, then you were not reading the same series!

There is not a lot of story to this second half of the story, but what it does offer is some of the must succulent sex scenes Isabella Belucci has ever shared. As was the case with her fetishizing of the convent (which does continue here with ritualized bloodletting and recitation of the futa commandments), it is the little details that make this so rewarding. Things like the almost scalding heat of futa fluids, the massive swelling of breasts, the inhuman size of their futa members, and the insatiable lust of their transformed bodies.

While there are only 2 stories in the Futanari Convent series, the characters do return in the Mother Superior trilogy - Futa v. Vampire, Decisions, and Confrontation - which I am eager to check out next. Maybe I can get Bob to convince the WTF team to do a futa vampire theme next, with Bryce Calderwood, J.A. Dolan, Gigi Whitney, and a few others to round out a weekend!

The WTF Weekend gang is group of readers and reviewers who enjoy Weird, Taboo, and Forbidden fiction that is most definitely NSFW. Join us every Saturday and Sunday for more twisted tales . . . and if you have a review to contribute, please contact us!
blasphemy book review-WTF erotica futa Isabella Belucci lesbian WTF