WTF Weekend: Taken by the Plant by J.Z. Dietz (@AuthorJZDietz)

A young woman and her captor make a gruesome discovery, a precursor to the horror that awaits them.

Tarquin, an ancient Roman soldier, has a newly aquired slave, and he has named her Blossom. As he leads her from the depths of the forest where she was captured the pair encounter a cult of carnivorous plant worshipping women who are determined to use him for their own sinister purpose. Will the women rescue Blossom, or has she merely gone from the frying pan into the fire?

If you like your horror to contain a strong mix of eroticsim, or your erotica drenched in horror, then you will love this novelette. Download it now. 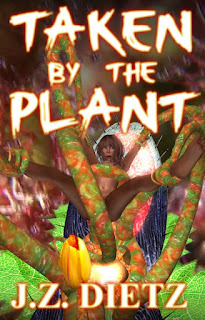 The story starts in a dark place, with a young woman who has been abducted, raped, and enslaved by a warrior. She isn't happy with her fate, but neither is she surprised. It's made clear that she lives in a society where such behavior is almost inevitable, and while she does ponder escape, she also realizes he could sell her to someone far worse.

Where their fates take a change for - well, I won't say better, just different - is with the discovery of a woman's body with a strangely carnivorous plant growing out of it. There's nice bit of fantasy action there, as he fights off writhing tentacle-like vines with his sword, and their ensuing capture by a trio of Amazonian sorceresses is even more interesting.