It's difficult to love a woman whose vagina is a gateway to the world of the dead...

Steve is madly in love with his eccentric girlfriend, Stacy. Unfortunately, their sex life has been suffering as of late, because Steve is worried about the odd noises that have been coming from Stacy's pubic region. She says that her vagina is haunted. She doesn't think it's that big of a deal. Steve, on the other hand, completely disagrees.

When a living corpse climbs out of her during an awkward night of sex, Stacy learns that her vagina is actually a doorway to another world. She persuades Steve to climb inside of her to explore this strange new place. But once inside, Steve finds it difficult to return... especially once he meets an oddly attractive woman named Fig, who lives within the lonely haunted world between Stacy's legs. 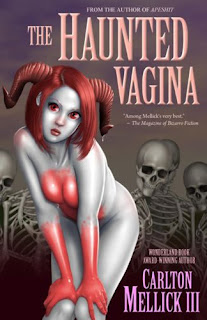 "I was scared to have sex with Stacy ever since I discovered her vagina was haunted."

That, right there, has got to be one of the best opening lines in the history of weird fiction. As a statement it's simple and straightforward, but as an idea it's completely bizarre. It's a great opening line, because it really sets the tone for the story to follow.

The Haunted Vagina begins with just a suggestion of weirdness, as Steve begins hearing voices and other odd noises coming from between Stacy's legs. From there it backtracks a bit, weaving a romantic little tale of lovers who met on a train and did nothing more than sleep and cuddle for a week, without even knowing each other's name. Carlton Mellick III includes a plethora of details that demonstrate just how cute the couple is, but there's a tinge of oddness beneath it all. By the time we come back to the voices, things quickly escalate, with a bloody skeleton that scratches and crawls its way free of Stacy's haunted vagina, forcing Steve to play the hero and bash in its skull.

Creepy enough for you? Well, it's about to get really bizarre. When Stacy calms down from her fright and realizes that she passed the skeleton pretty easily, she convinces Steve to play spelunker extraordinaire and crawl inside her to see where the voices are coming from! Not only does he do it, and not only does he fit completely inside her (don't ask how, just accept and enjoy), but he discovers that her birth canal houses a portal to another world . . . the very same world that gave birth (quite literally) to Stacy's childhood imaginary friend.

Beneath all that weirdness, there's actually a pretty deep tale of identity and human relationships. Mellick's story has a lot to say (or, at least, suggest) about who holds the power in a relationship, and what abusing that power can do to change a person's identity. Steve goes on a very weird journey to get inside his girlfriend, and once there he goes on something of a spiritual journey as well, especially after he's showered with evidence of Stacy's infidelity. Yes, that means precisely what you're afraid it means, as grossly extreme as bizarro erotic horror can get, and it comes at a moment that serves to shock the reader into remembering where he is and how he got there.

The Haunted Vagina is a strange story, sometimes sad and sometimes sweet, with moments of absurd humor to balance out the absurd horror. It's not as over-the-top as some of Mellick's work, but it remains one of my favorites. It's a book that crawls deep inside your head and amazes you with what kind of tale such a simple, yet bizarre, concept can breed.

The WTF Weekend gang is group of readers and reviewers who enjoy Weird, Taboo, and Forbidden fiction that is most definitely NSFW. Join us every Saturday and Sunday for more twisted tales . . . and if you have a review to contribute, please contact us!
bizarro book review-WTF Carlton Mellick III gts horror WTF