Can't Wait Wednesday - The King of Bones and Ashes by J.D. Horn (@AuthorJDHorn)

on January 03, 2018
"Waiting On" Wednesday is a weekly event, originally hosted by Jill over at Breaking the Spine, that spotlights upcoming releases that we're eagerly anticipating. Since Jill is no longer hosting it, I'm joining Can’t Wait Wednesday movement over at Wishful Endings. 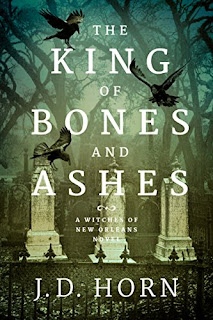 The King of Bones and Ashes by J.D. Horn
Expected publication: January 23, 2018 by 47North

From the Wall Street Journal bestselling author of the Witching Savannah series comes the story of a young witch’s quest to uncover her family’s terrifying history...

Magic is seeping out of the world, leaving the witches who’ve relied on it for countless centuries increasingly hopeless. While some see an inevitable end of their era, others are courting madness—willing to sacrifice former allies, friends, and family to retain the power they covet. While the other witches watch their reality unravel, young Alice Marin is using magic’s waning days to delve into the mystery of numerous disappearances in the occult circles of New Orleans. Alice disappeared once, too—caged in an asylum by blood relatives. Recently freed, she fears her family may be more involved with the growing crisis than she ever dared imagine.

Yet the more she seeks the truth about her family’s troubled history, the more she realizes her already-fragile psyche may be at risk. Discovering the cause of the vanishings, though, could be the only way to escape her mother’s reach while determining the future of all witches.


I'm always up for a good Gothic story of witchcraft, and this has a lot of hooks that make it a must-read.
gothic horror J.D. Horn Waiting On Wednesday witches