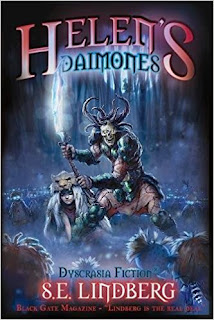 The Dyscrasia novels by S.E. Lindberg are deep, intricate reads that harken back to the pulp days of Lovecraft, Howard, and others. They are heavy with words, stories that exist as much in the telling as they do in story. These are reads that are not to be glossed over or skimmed, but carefully digested, and with your full attention. Rush through it, and you'll not only miss the details, but the nuances that define it.

The third book to be released, but the second in the series (chronologically), Helen's Daimones is actually a "gateway novella" that can be read first. There's a trippy kind of logic there, and if you can appreciate it, you'll have no problem with the read.

Lindberg's first two Dyscrasia novels were defined by their ideas, their themes, and the overall mythology. This is no different. The characters, while fascinating, tend to be a little too cold and too harsh to be easily relatable. While the focus on children this time out makes the story a little more accessible, it also makes the story an even more difficult read, especially when the ghosts of murdered children step to the forefront.

What this chapter did for me was breathe real life (no pun intended) into Lord Lysis. He becomes a sympathetic character here, especially in his encounter with a tragic young woman (buried alive so many years ago), the ghosts of her children (hung for their corruption), and their army of dolls (crazy, dangerous dolls). He's still a monster, a fearfully powerful being, but he's also a personality here. As for Doctor Grave, he was already a full-fledged character, but he becomes a little more chilling here as new layers of mystery leave us to question his deeper motives.

Helen's Daimones is weird fantasy, weirdly told, for weird readers. As the strongest of the three stories to date, it makes for a great introduction to Lindberg's world, and creates more than enough interest for a fourth entry.