on August 30, 2017
"Waiting On" Wednesday is a weekly event, originally hosted by Jill over at Breaking the Spine, that spotlights upcoming releases that we're eagerly anticipating. Since Jill is no longer hosting it, I'm joining Can’t Wait Wednesday movement over at Wishful Endings. 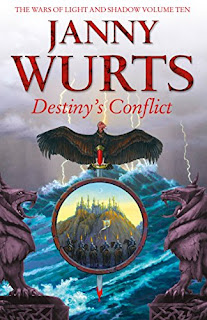 The long-awaited second book of the fourth story arc - Sword of the Canon - in the epic fantasy series, the Wars of Light and Shadow.

Lysaer’s unstable integrity lies under threat of total downfall, and as his determined protector, Daliana will face the most frightening decision of her young life. Arithon, Master of Shadow, is marked for death and still hunted, when his critical quest to recover his obscured past entangles him in a web of deep intrigue and ancient perils beyond his imagining.

Elaira’s urgent pursuit of the Biedar Tribes’ secret embroils her in the terrible directive of the Fellowship Sorcerers, while Dakar — the Mad Prophet — confronts the hard reckoning for the colossal mistake of his misspent past, and Tarens is steered by a destiny far from his crofter’s origins.

The penultimate volume of The Wars of Light and Shadow will touch the grand depths of Athera’s endowment, and deliver the thrilling finale of arc IV, the Sword of the Canon. War, blood, magic, mystery – and the most hidden powers of all – will stand or fall on their hour of unveiling.

I am woefully behind in this series, but it's one I intend to catch up with - hopefully before it come to an end.
epic fantasy Janny Wurts Waiting On Wednesday