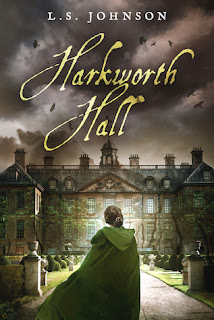 Harkworth Hall is one of the most interesting stories I have read in quite a while. It's a deceptive piece of literature that seems to be one thing, but which has a whole other story lurking beneath the surface. L.S. Johnson simultaneously captures the feel of old-school Gothic romance and Victorian horror beautifully, but imbues it all with some contemporary sort of sexual confidence.

Rather than being your typical gothic protagonist, Caroline is a strong, confident woman, not afraid to play a role outside her father's approval. Mr. Masterson is an interesting twist on the gothic antagonist, a seemingly suave and sophisticated gentleman with ulterior motives, but it is Mr. Chase who brings the whole story together. Minor spoiler here, but he is actually a heroine in disguise, a woman who kindles an inappropriate spark within Caroline while working to expose her employer.

On top of the Gothic romance and Victorian horror, there is also a paranormal thriller that, perhaps, fits a bit awkwardly within the final pages, but makes for an enjoyable whole. Harkworth Hall wasn't at all what I was expecting, and it's all the better for the surprise.


Disclaimer: I received a complimentary ARC of this title from the publisher in exchange for review consideration. This does not in any way affect the honesty or sincerity of my review.
book review Gothic romance horror L.S. Johnson lgbt