Waiting on Wednesday: An Echo of Things to Come by James Islington

on July 12, 2017
"Waiting On" Wednesday is a weekly event, hosted by Jill over at Breaking the Spine, that spotlights upcoming releases that we're eagerly anticipating. 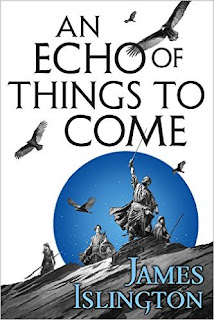 An Echo of Things to Come by James Islington
Expected publication: August 22nd 2017 by Orbit

The second book in the acclaimed Licanius Trilogy by James Islington.

"Love The Wheel of Time? This is about to become your new favorite series." - B&N SF & Fantasy Blog

"Fans of Robert Jordan and Brandon Sanderson will find much to admire." - Guardian

In the wake of a devastating attack, an amnesty has been declared for all Augurs-finally allowing them to emerge from hiding and openly oppose the dark forces massing against the land of Andarra. As the Augur Davian and his new allies hurry north toward the ever-weakening Boundary, however, fresh horrors along their path suggest that their reprieve may have come far too late.

His ally in the Capital, the new Northwarden, contends with assassins and politicians, and uncovers a dangerous political secret. Meanwhile, their compatriot Asha begins a secret investigation into the disappearance of the Shadows.

And Caeden races against time to fulfill his treacherous bargain with the Lyth, but as more and more of his memories return, he begins to realise that the two sides in this ancient war may not be as clear-cut as they first seemed...


I have to admit, Islington's debut slipped my notice when it first hit shelves, but I have heard nothing but good things about it. My copy of The Shadow of What Was Lost, the first book of The Licanius Trilogy, arrived this morning, so I shouldn't be too long in catching up.
epic fantasy James Islington Waiting On Wednesday