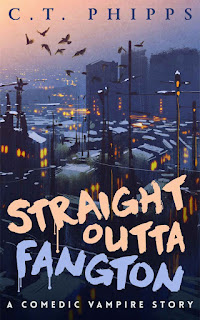 I find humor, more than any other genre, to be dangerously subjective. While fantasy, horror, and urban fantasy can afford to have hit-or-miss elements, humor tends to be all or nothing. Fortunately, C.T. Phipps already struck my funny bone with The Rules of Supervillainy, so I was more than willing to give Straight Outta Fangton a read.

Not only is it a funny book, but it's a creepy vampire story, a kick-ass action novel, and an intriguing urban fantasy at the same time. There's a lot going on here, Phipps keeps it all under control and ties it all together in an entirely satisfying read.

First, let's talk funny. The humor here is subtle and clever, more knowing nods and amused chuckles than laugh-out-loud slapstick, and it works. Most of that humor comes from the dialogue, but there's some genuine laughs in the narrative as well. Peter and David are at the heart of most of that humor, with their master-servant interplay as awkward as it is entertaining.

As for the vampires, these are your vintage bloodsuckers, scary and powerful, with dark legacies and internal politics. Most of the humor comes from their integration into society, with the youngest of the breed struggling to juggle day jobs with nocturnal hungers. There are so many pop culture nods, from Buffy to Necroscope, it's almost hard to keep up, but it adds an air of authenticity to the story.

The action novel and urban fantasy are tied together, especially with the epic battle that closes out the novel, pitting vampires against vampire hunters, religious fanatics, and other vampires. We're talking equal parts Underworld and The Matrix. That's also where the world building comes in, explaining how and why the vampires came to own/control so much of the world, and exploring the racism, bigotry, and religious intolerance that comes along with the new world order. There are elements of terrorism and vigilantism here, all combining in a pay-off that delivers all on the promise.

Like I said, humor is subjective, and as a hardcore vampire fan, I tend to be rather unforgiving of books that betray the classic ideal for sexy and sparkly. Straight Outta Fangton was everything I could have asked for, a novel that delivers on its promises.


Disclaimer: I received a complimentary ARC of this title from the author in exchange for review consideration. This does not in any way affect the honesty or sincerity of my review.
A.M. Rycroft book review C.T. Phipps humour urban fantasy vampires