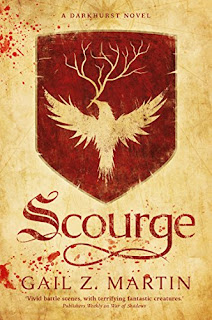 Few authors can pull off the delicate combination of horror and fantasy. It's something of an awkward dance of genres, even when you're stretching the definition of fantasy with something like the grimdark movement. When you're talking heroic/epic fantasy, it becomes even more of a challenge, and yet Gail Z. Martin has done it again.

Scourge: A Darkhurst Novel is a book that opens with the exorcism of a violent, vengeful spirit, and then immediately leaps into a lynch mob extermination of a nest of undead, fast zombie-like monsters. It is almost like an urban fantasy in epic fantasy clothing, with some contemporary influences (like Buffy & Supernatural) that I'm sure many readers will catch along the way, but regardless of genre, when your heroes are undertakers, you know you're in for an unusual read.

This has all the hallmarks of a Gail Z. Martin novel. First of all, you have strong, complex characters with personalities, involved in real, often messy relationships. The Valmonde brothers are at the heart of it all - with all the bickering, infighting, and brotherly camaraderie you'd expect - but they're surrounded by an equally strong cast of supporting characters, and one of the more entertaining villains you are likely to come across in Lord Mayor Machison.

Second, you have a full, deep mythology, complimented by some exemplary world-building. The supernatural here is only half the story, but it is a fantastic half that delivers on all the promise of ghosts, ghouls, monsters, and more. On the more mundane side, it has the familiar flavor of a medieval fantasy, but with a strong political aspect involving merchant princes and trade guilds of Ravenwood. There is a little bit of info dumping, but it is crucial to the plot, even if it does drag the story down a bit.

On that note, there are some pacing issues with the book that may bother some readers. While it has a frantic, kick-ass opening, there are some prolonged lulls in the middle of the book, and the conclusion feels rather sudden. Part of that is due to the narrow focus, keeping the three brothers at the heart of the action. While a few more POV characters may have helped with the pace, they would have felt out-of-place in a story that belongs to Corran, Rigan, and Kell. Really, so long as you remember that this is the opening chapter of a new series, the pacing (and info dumping) is completely understandable.

If you're okay with swapping dragons for monsters and armies for merchants, with a family of undertakers as your unorthodox heroes, Scourge is a fun read that does something unique within a crowded genre. Well worth a read.


Disclaimer: I received a complimentary ARC of this title from the publisher in exchange for review consideration. This does not in any way affect the honesty or sincerity of my review.
book review epic fantasy Gail Z. Martin horror