Waiting on Wednesday - The Black Elfstone by Terry Brooks

on April 12, 2017
"Waiting On" Wednesday is a weekly event, originally hosted by Jill over at Breaking the Spine, that spotlights upcoming releases that we're eagerly anticipating. 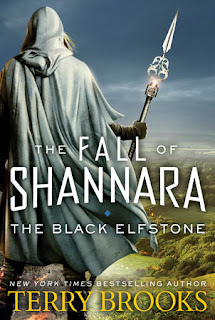 The first book of the triumphant and epic four-part conclusion to the Shannara series, from one of the all-time masters of fantasy.

Through forty years of New York Times bestselling Shannara novels, Terry Brooks always had an ending in mind: a series that would bring it all to a grand conclusion. Now that time is here.

The Four Lands has been at peace for generations, but now a mysterious army of invaders is cutting a bloody swath across a remote region of the land. No one knows who they are, where they come from, or what they are after—and most seem content to ignore these disturbing events. The only people who sense a greater, growing threat and wish to uncover the truth are society’s outcasts: an exiled High Druid, a conflicted warrior, a teenage girl struggling to master a prodigious magic . . . and a scrappy young orphan, improbably named Shea Ohmsford.


Like the Riftwar Cycle, my literary wanderings have taken me far from Shannara over the years, but I'm hoping this 'final' series proves to be just as satisfying as Feist's Chaoswar Saga.
epic fantasy Terry Brooks Waiting On Wednesday