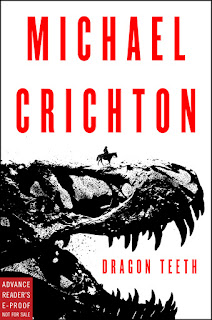 Unlike so many ghost-written novels that are 'polished' after an author's death, Dragon Teeth does feel like the completed manuscript it is purported to be. In fact, it reads very much like one of Michael Crichton's earlier historical novels - The Great Train Robbery, Eaters of the Dead, and even (to some extent) Congo. It is a leaner, simpler sort of story, more concerned with the facts of the past than the theories of the future.

Readers with an interest in paleontology are likely already familiar with the infamous feud between Othniel Charles Marsh and Edwin Drinker Cope, but Crichton makes their rivalry come alive through the unlikely eyes of William Johnson - a wealthy student from the East who lied his way into the West in order to collect on a bet. As Crichton admits in his Author's Note at the end, as crazy as it all is, he deliberately played down some of the more outrageous aspects of the feud, making it seem more realistic to new readers.

Johnson is a fun character to ride along with, a young man who changes drastically over the course of the novel. We watch as he grows and matures, as he has his eyes opened to the harsh realities of the West, and as he fights his way back home - a journey that seems destined to never end. His cross-country journey along the rails is worth the price of admission alone, with a stampeding herd of buffalo a definite highlight, and his time in the barren, wind-swept, alkaline flats is far more fascinating than the landscape would suggest. A good part of the novel there deals with the very real threat of the Indian Wars, with Crichton proving himself to be rather sympathetic, portraying most of the tribes in a positive light. The latter half of the novel is almost a Wild West dime-store novel in and of itself, complete with saloons, gunfights, and even Wyatt Earp. It is there than Johnson shines brightest, becoming not just a convenient narrator, but an authentic hero.

The science here is solid, exploring the discovery, the naming, and the construction of dinosaurs. It is the characters who make Dragon Teeth come alive, though, with heroes and villains alike putting a recognizable face on a very different era. Hopefully, this won't prove to be his last finished manuscript to be discovered but, if it is, then it's nice to know his posthumous career will have ended on a high note.


Disclaimer: I received a complimentary ARC of this title from the publisher in exchange for review consideration. This does not in any way affect the honesty or sincerity of my review.
adventure archaeology book review dinosaurs historical fiction Michael Crichton