Waiting on Wednesday: Owl and the Electric Samurai by Kristi Charish

on March 22, 2017
"Waiting On" Wednesday is a weekly event, hosted by Jill over at Breaking the Spine, that spotlights upcoming releases that we're eagerly anticipating. 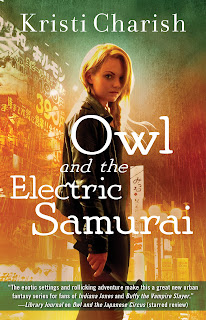 Owl and the Electric Samurai by Kristi Charish
Expected publication: May 8th 2017 by Simon & Schuster

The International Archaeology Association (IAA) is responsible for keeping all things supernatural under wraps. They’re also responsible for ruining the promising archaeology career of Alix Hiboux, better known as Owl.

Needless to say, Owl’s still a little sore about that.

Just to keep Owl’s life lively, the IAA has opened a bounty on the two designers of World Quest, the online RPG that is much, much more than it seems. Owl needs to locate the notorious gaming duo before the other mercenaries do. But finding the gamers won’t be easy since every clue points to them hiding out in the legendary lost city of Shangri-La. Not to mention that the last time Owl and the game designers spoke, their conversation didn’t exactly end on the best note…

Meanwhile, undercurrents of supernatural politics are running amok in Tokyo, dragging Owl and her friends into a deadly game of wits with an opponent who calls himself the Electric Samurai. The cost of losing? All-out civil war between two powerful supernatural factions.

All in all, just another great day on the job.


Technically, I am no longer waiting, since I nabbed an electronic ARC last week, but I have been looking forward to this. It's such a fun series, mixing urban fantasy with archaeological adventures, and Owl is a fantastic heroine.
archaeology Canadian Kristi Charish urban fantasy Waiting On Wednesday