#Thriller Review: The Only Child by Andrew Pyper 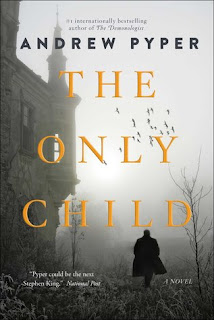 The Only Child is . . . well, it's a lot of things, and I think that might be the problem. Andrew Pyper weaves what could have been an entirely satisfying gothic horror story, but then dilutes it with the trappings of a contemporary psychological thriller, drags it down with a 'hunter' subplot that's as weak as it is unwanted, and ties it all to a protagonist who loses all appeal after the first few chapters.

Dr. Lily Dominick is introduced as a smart, strong, independent young woman who chooses to confront and catalogue the monsters around us. There's a glimmer of humanity beneath her cool, clinical exterior that engages the reader and draws us is, but it's all too quickly extinguished. Instead, she's reduced to the role of victim, an emotionless pawn who forces the story forward, but about whose fate it's really hard to care.

Michael, the madman and monster at the heart of the tale, is really the only reason to keep reading, but even he wears thin after a while. His backstory is utterly fascinating, a tragic tale of gothic horror that ensnares Shelley, Stevenson, and Stoker, but it's only a small part of the story. Unfortunately, the bulk of the story involves his pursuit of Lily, and while there are some interesting questions there to drive the suspense, his threatening taunts and incestuous sexual innuendo are so over-the-top that he becomes a mockery of the genre. Even worse, their contrived cat-and-mouse game will have you mentally calculating the odds of continually being in the right place, at the right time, to see/hear/find the right thing.

The whole 'gothic' thing is played very well for about the first half of the novel, before it's almost completely forgotten. There are some great set pieces, such as the Kirby Forensic Psychiatric Center and the abandoned asylum in Budapest, but too much of the story takes place in airports, hotels, and tile-floor bathrooms. Similarly, Michael's diaries and journals are utterly fascinating, and really serve to bring the story to life, but then they just disappear. As for the hunter subplot, the story could have done very well without it. Aside from introducing a lame romantic subplot and orchestrating a violent climax that feels out of place for the genre, it never really serves a purpose. It never feels as if Lily is truly threatened by the hunters; we're not given enough detail to ever question (or care) whether they are good or bad; and their pursuit of Michael adds absolutely nothing to his story.

There's a really good gothic horror story buried in The Only Child - unfortunately, it's overwhelmed by a boring contemporary psychological drama and a clichéd procedural thriller. The twist ending (which should come as a surprise to absolutely no one) redeems it somewhat, but by that point it's too little too late.

I won't be so crass as to suggest The Only Child should have been aborted, but it's probably for the best that it doesn't have any siblings.


Disclaimer: I received a complimentary ARC of this title from the publisher in exchange for review consideration. This does not in any way affect the honesty or sincerity of my review.
Andrew Pyper book review Canadian thriller