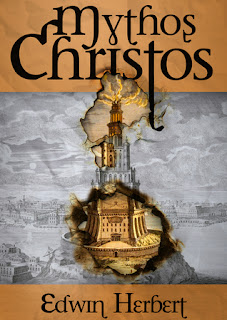 Given how much controversy Dan Brown generated with The Da Vinci Code, his 'scandalous' suggestion of a secret marriage between Jesus and Mary was really quite underwhelming. It's like suggesting that Zeus seduced Leda as a goose rather than as a swan - a significant twist on the mythology for some, but a big yawn for a rest of us.

While I suspect Mythos Christos is both too daring and too smart to ever generate the same level of global hype, Edwin Herbert's novel is very much the book that I had hoped Brown's would be. Rather than safely limit himself to casting doubt upon one small part of the biblical story, Herbert deconstructs the entire mythology, exposing its origins, and exploring the complete absence of an historical record for Jesus during his lifetime.

This is a story told in two parts, with an historical thriller interspersed with the more contemporary adventure.

In the latter, we have a young scholar by the name of Lex Thomasson reluctantly leading a secret Vatican team in uncovering the lost documents of the Library of Alexandria. He starts out naively believing that they will allow secular study of the documents, but soon comes to realize that their only goal is to destroy what they believe to be a heretical threat to their faith. It is a very dark and cynical tale in many aspects, but also a wondrously exciting one in others. The mathematical puzzles and old-fashioned treasure hunt are Indian Jones worthy, and some of the archaeological sites are stunning to explore, especially with their clash (and sometimes usurpation) of mythological idols.

In the former storyline, we follow the famous philosopher Hypatia as she guards against the encroaching destruction of the Romans, as they seek to purge all elements of paganism, especially those that contradict the spreading tenets of Christianity. There's some necessary invention in this part of the story, with timelines compressed and historical personages juggled around, but the overarching historical details are solid. It provides a fascinating look at a significant time in history, exploring it from the unique perspective of the pagans who were being displaced, rather than the Church that was selectively chronicling its own history. It is Hypatia who preserves the documents, establishes the puzzles, and sets in motion the treasure hunt of centuries later, although she never expected discovery to take quite so long.

Assuming you can keep an open mind, Mythos Christos is a fascinating novel that works as well as a history lesson as it does an adventurous thriller. Even the most cursory glance at the mythologies of the world will show that each has taken something from the ones before it, and even the most devout believers cannot deny that contemporary mythologies are hardly the first to tell many of their most significant stories. However, when you really start to dissect the mythology, to look at in terms of origins and sources, and realize just how much of it is really paganism under a new name, it becomes all too easy to believe that two warring cultures would have gone to such great lengths in attempting to obliterate or preserve history.

I went into Mythos Christos with impossibly high hopes, and never really expected Edwin Herbert to deliver on his own premise. I kept waiting for him to pull back at the last minute or to cast some shadow of doubt upon Lex, but he sees this through to the very end - without, I might add, going too far the other way. While Herbert is certainly preaching to the converted (so to speak), the way he uses Lex and Thea to explore the dictates of faith and reason, and the way he concludes the story by leaving room for both to coexist, certainly offers something of an olive branch to more fundamental readers. This is one of those rare books that I will keep on hand and gladly revisit again over the coming years.


Disclaimer: I received a complimentary copy of this title from the author in exchange for review consideration. This does not in any way affect the honesty or sincerity of my review.