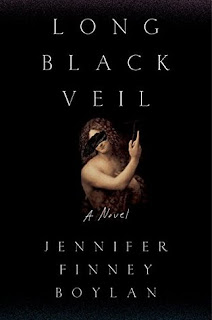 I first encountered Jennifer Finney Boylan a number of years ago through her memoir, I'm Looking Through You: Growing Up Haunted. It remains one of the most unique books I have ever read, a real-life ghost story that weaves a lighthearted paranormal investigation of Boylan's haunted family home with a more somber exploration of gender identity/expression.

With Long Black Veil, Boylan makes a long-awaited return to adult fiction, her first such foray since her humorous novels of the early 90s. Like her memoirs, the book works on two levels, and it's the way those two aspects interweave that makes it such a compelling read. This is a story of identity - and, more importantly - mistaken identity.

It all begins one night in 1980 when a group of friends decides to tour the abandoned ruins of Philadelphia’s Eastern State Penitentiary. A darker, creepier, more perfect setting you couldn't ask for, with its labyrinthine corridors, moldering cells, crumbling chapel, and old electric chair. Add the twist of being deliberately locked in - the cells doors chained and padlocked - and the disappearance of one of their number, and you've got a great story in the making. Of course, that's only half the story, with the other half taking place twenty years later, when the body is finally located and one of those friends is accused of murder. In between, there's a third storyline, involving the disappearance of one of those friends, with that journey having consequences for all.

The way the novel is structured is a big part of what makes this work so well, with Boylan shifting between the three timelines in such a way that we're halfway through the book before we know who disappeared, and nearly at the end before we realize who did it. Much of the novel is a character study, a drama about broken friendships, broken romances, and broken people. It's a dark, brooding sort of novel, full of sorrow and pain, but there's also an undercurrent of dark humor to it that you have to be a tad morbid to appreciate. I can't say more about the issue of identity without getting into spoiler territory, but it should come as no surprise that Boylan knows how to get at the heart of what haunts us.

Some readers may find the final chapters a bit odd, but that's where the morbid aspect comes in. The contrast of the abandoned ruins with the renovated ruins is fantastic, especially in the way contemporary spectacle and manufactured fear resonates with the real terror of the past. Similarly, the way mistaken identities open and close the tale is a nice touch, with a larger question of identity connecting them. It's been a long time since I sat down and devoured a book in a single day, but that's precisely what happened with Long Black Veil on the first cool Sunday of Spring. Highly recommended.


Disclaimer: I received a complimentary ARC of this title from the publisher in exchange for review consideration. This does not in any way affect the honesty or sincerity of my review.
book review gender Jennifer Finney Boylan lgbt thriller