Fantasy Review: The War of the First Day by Thomas Fleet 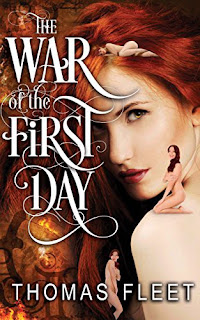 The War of the First Day is an epic fantasy novel that has something of a Mistborn feel to it, with the comic book sensibilities of a Dr. Strange or Green Lantern. The witches here are warrior-sorceresses, imbued with magic that gives them superhuman powers and abilities. Right from the opening scene, where Lilta bounces around the castle, using magical speed that would make The Flash raise an eyebrow in appreciation, you know this is not to be your typical fantasy novel.

To Thomas Fleet's credit, he establishes his concept early on and never strays from it. This is not just epic fantasy with extreme magic or stunning sorceresses as window-dressing. Magic permeates the tale, from beginning to end, and it drives the plot as much as it accentuates it. As for the sorceresses, they are both the heroes and the villains, locked in a rebellious conflict that began with an act of near-genocide, populating a story that is almost wholly female-focused.

Like I said, this is a story with has a superhero feel to it, within an epic fantasy setting. It's predominantly focused on the war between two factions of witches - a war of attrition that's full of massive battles, covert operations, and scenes of torture and interrogation, complete with a villainess who likes to boast about her plans. It would have been easy to let the magic and the spectacle overwhelm the story, but Fleet keeps his characters at the forefront, developing them quickly and significantly throughout. There's also a lot of thought beneath the story, with some interesting themes on the power of knowledge, female empowerment, and a goddess-centric culture. Going back to those comic book sensibilities again, there's a lot of talk of math, logic, and even cryptography, not to explain away the magic, but to provide context and a deeper meaning.

Where some readers may stumble a bit is with the 21st-century sensibilities of the characters, including their speech patterns and attitudes. It makes it a more mature form of epic fantasy, but it never really seems out of place in the world Fleet has created. The writing is fluid, with some nice terms of phrase, and the dialogue is worth of the action, which is where this veers back towards epic fantasy and away from comic book clichés. I was hoping for a lot out of The War of the First Day, and I am pleased to say it delivered. My only regret, in fact, is that I let it linger on the shelf for so long.


Disclaimer: I received a complimentary copy of this title from the publisher in exchange for review consideration. This does not in any way affect the honesty or sincerity of my review.
book review epic fantasy Thomas Fleet witches