#Fantasy Review: The Heart of What Was Lost by Tad Williams 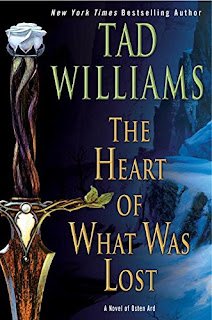 It's hard to believe it's been over twenty years since I last visited Osten Ard. In that time I finished high school, completed my Bachelor's degree, got married, and embarked on a career that saw me spend 15 years with the same company. When I heard Tad Williams was returning to the world of Simon and Miriamele, I was cautiously excited. I haven't had a lot of luck revisiting the fantasy sagas of my youth, but I remembered Memory, Sorrow, and Thorn as being deeper and more complex, hence the cautious optimism.

The Heart of What Was Lost is what I would call an epic novella. It captures the essence of the original trilogy, including the world-building and the mythology, but does so on a smaller scale. This is an intimate tale of two companies, Human and Norn, engaging in a series of sad, desperate sieges. It's a story of loss, the thirst for revenge, and the drive to preserve a race. There's no grand heroism or thoughts of conquest here, just a battle for survival in the face of extermination.

There are two character pairings at the heart of the story putting a face on the horrors of genocidal war. Porto and Endri book-end the story, soldiers from the same hometown in the south who strike up a friendship on the trail. It's astounding just how well Williams is able to not only build these characters in so few pages, but establish a relationship that tugs at the reader, especially during the darkness of the final chapter. Viyeki and Yaarike, meanwhile, are Builders from the north, master and apprentice who find themselves caught between loyalties and ethics before the end. Again, Williams does such a strong job of drawing them for us, it's all too easy to empathise with the difficult choice that is ultimately forced upon them.

As you'd expect from Tad Williams, the set pieces here are magnificent, from frozen forests, to ruined keeps, to the mountain depths. The sieges are powerful and exciting, with incredible sacrifices required of each side, with moments of both glory and horror. There is a scene of fire that may be one of the best that Williams has ever written, and another of death and undeath that surprised me with its power.

I wondered how much of this would be recap and rehash, connecting Memory, Sorrow, and Thorn with The Last King of Osten Ard, and the answer is almost none. This reads like a lost epilogue from To Green Angel Tower, a story that continues effortlessly from the original. There are a few small details to spark the reader's memory, but nothing that would serve to welcome new readers into the world. The Heart of What Was Lost is a story that stands on its own, important because of what has gone before, and . . . well, we'll have to wait until June to see how it ties into The Witchwood Crown.


Disclaimer: I received a complimentary ARC of this title from the publisher in exchange for review consideration. This does not in any way affect the honesty or sincerity of my review.
book review epic fantasy Tad Williams