Non-Fiction Review: The Lost City of the Monkey God by Douglas Preston 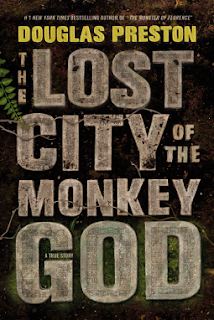 The Lost City of the Monkey God is a fascinating look at the spectacle, the science, and the politics of twenty-first-century archaeology. In it, Douglas Preston deftly weaves a number of tales, both historic and contemporary, into a whole that is far more than the sum of its parts. Even when it veers into prolonged tangents on topics such as bananas, Preston manages to keep the reader enthralled and thirsty for knowledge.

A lot of this book is about spectacle and, despite the naysayers, spectacle has always been a huge part of science. Nobody wants to invest millions of dollars and risk their life on a boring journey to pick up something of negligible interest. Spectacle is what gets us excited, it's what drives us towards discovery, and it's what motives us to support and finance those discoveries. As Preston illustrates, that's not always a good thing - stories of con-men and liars abound here - but you can't sever the emotion from the intellectual pursuit. After all, no matter how interested they may be in the history and the scientific techniques, I daresay most readers will be picking this up primarily for the spectacle of a mythical lost city, hidden deep inside the deadly Honduran rain forest, filled with treasures not seen in over a thousand years.

As for the science, those who so casually dismiss The Lost City of the Monkey God because of the spectacle are doing themselves a massive disservice. There is a lot of science here, and it is utterly fascinating. I know more now than I ever wanted to about early cartography, radar/laser imaging, archaeological technique, and sheer logistics, but I don't regret a single page. It's mind-blowing to see how far we've come over the last century, and to understand just how complex (and expensive) the most cutting edge techniques are. As Preston illustrates time and time again, skepticism of anything new is still alive and well, even after all these years, with some people vehemently against the idea of using technology as an archaeological tool.

That brings us, of course, to the politics of it all. One the one level, there are the actual government-level politics of mounting an expedition, with permission, clearance, and licensing needed to even conduct a simple aerial search. More than once, we read of an expedition derailed at the last minute by the tides of war or political upheaval. On another level, there are the petty internal politics of the scientific community, with people completely discounting the expedition's accomplishments to make an esoteric intellectual point about process or to argue semantics. They would rather see such cities remain undiscovered, robbing the world of the chance to learn about a lost civilization, than have even one person be 'wrongly' entertained by the spectacle.

I should also add, in closing, that this is a book about consequences. Preston spends a lot of time talking about the dangers of the rainforest, recounting terrifying encounters with giant, venomous snakes, and disgusting battles with tiny, crawling, biting insects. He talks of diseases, deadly accidents, flash floods, and more, but everybody congratulates themselves on coming out of the expedition alive . . . until a deadly parasitic infection is discovered months later. As terrifying as nights in the rainforest might have been, it's watching people being eaten alive by parasites, suffering from treatments that are reserved only for patients who are at death's door, that reminds you of the price we pay for the knowledge we gain.


Disclaimer: I received a complimentary ARC of this title from the publisher in exchange for review consideration. This does not in any way affect the honesty or sincerity of my review.
adventure archaeology book review Douglas Preston nonfiction