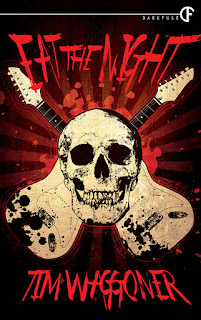 Eat the Night was, without a doubt, one of the weirder stories I've read this year. Not weird in the WTF perverse kind of sense, but more in a surreal, unsettling, disjointed sort of way. Tim Waggoner tells what seem to be three stories here, which only become even weirder once their intersection becomes clear.

From there we skip to a tormented young woman, waking from a dream . . . or is it a memory? What should be the most normal part of the novel slowly suffocates under hints of dark thoughts, a dark past, and the odd mystery of the basement door hidden behind a thin layer of wallpaper.

Next, we switch to a mysterious Maintenance crew, who are part X-Files, part Ghostbusters, and part Men-in-Black, but considerably darker (and weirder). They're responsible for monitoring the monsters of the world, both human and otherwise, all in a vain attempt to prevent the approach of entropy.

I love that the suburban elements of the tale are the darkest, most violent, goriest aspects of the tale, with some truly chilling scenes and settings. The early revelation of Joan's dark past is appropriately shocking, even within such a dark tale, and the later exposure of that event's significance really brings the story full circle. Similarly, I thought it was brilliant that something as weird as the Maintenance crew came to be the only sane thing in the novel, with Kevin (and his unfortunate partners) the only thing standing between the reader and the darkness.

In the end, Eat the Night smartly played against my expectations at just about every turn, keeping me unsettled and intrigued throughout. If you're a fan of weird horror, it is well worth the read.


Disclaimer: I received a complimentary ARC of this title from the publisher in exchange for review consideration. This does not in any way affect the honesty or sincerity of my review.
book review horror Tim Waggoner