Waiting on Wednesday: The Midas Legacy by Andy McDermott

on August 10, 2016
"Waiting On" Wednesday is a weekly event, hosted by Jill over at Breaking the Spine, that spotlights upcoming releases that we're eagerly anticipating. 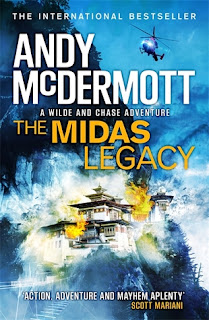 The twelfth in the fantastic Wilde/Chase series sees Nina trying to follow in her late mother's footsteps as she and husband Eddie search for King Midas' legacy. Fan Scott Mariani says that McDermott's adventure thrillers are full of 'action, adventure and mayhem aplenty'. if you read Cussler, Mariani or James Rollins you'll love this.

A return to Atlantis

The lost city has defined Nina Wilde's life. Her parents' obsession with Atlantis cost them their lives, but finding it brought Nina to her husband Eddie Chase and a series of archaeological treasures.

A decade later, the International Heritage Agency needs their help to locate the Secret Codex, an account of ancient Atlantean explorer Talonor's journeys, thought to be located in the dangerous underwater ruins of Atlantis. Unable to resist one more adventure, the couple join the mission.

A king whose touch turns to gold

But when a long-lost relative reappears in Nina's life, asking her to use the Codex to find a hidden cave containing the secret of King Midas, she is unprepared for the devastation that follows. The promise of unlimited gold has aroused the greed of powerful and ruthless forces... and only Nina and Eddie stand in their way.


While living in Canada can sometimes be a challenge as a reviewer, it is a definite boon as a reader - our bookstores tend to carry both US and UK editions, meaning we get titles like this months in advance of the US. I'm a huge fan of this series, and anxious to see some closure for Nina.
Andy McDermott archaeology thriller Waiting On Wednesday