Sci-Fi Review: The Gate To Futures Past by Julie E. Czerneda (with #GIVEAWAY) 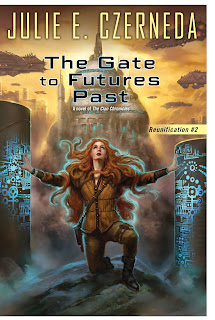 One of the things that I love most about the science fiction of Julie E. Czerneda is that it's never predictable, and never the same thing twice. Currently standing at eight books, her Clan Chronicles is one of the deepest, most diverse series in a genre that's best defined by its grasp of ideas.

With The Gate To Futures Past, the series arrives at a major turning point, one that I doubt most readers will see coming. Sira and Jason, along with member of the Mhiray and Om'ray, are trapped in a dangerous flight aboard the sentient ship Sona. With no bridge and no controls, and levels that rearrange themselves, shunting the passengers into an ever-shrinking living space, all they can do is trust that the ship is indeed taking them home - even if they have no idea where that home may be.


This ship's taking us back where this started . . . What makes you think that's as simple as a world?

It's an odd entry in Czerneda's space-faring epic, with half the novel taking place in the claustrophobic confines of the Sona. The drama and the tension here is largely internal, with the refugees beset by bad dreams and the haunting cries of the dead. It's a story of madness, desperation, and rapidly diminishing hope. The ship itself seems content to take care of its passengers, but only communicates with Sira in short, vague bursts. They don't understand it, and aren't sure they can trust it, especially once it begins herding them all into the core.

The second half of the novel will be more familiar to readers of the series, both in terms of scope and storyline. Once again, the Clan finds that home may not be a home, and that they may not fit with the other races already there. It's clear they're not welcome, and when things begin to go wrong . . . well, they do so in spectacular fashion. I loved the way the world literally explodes around them, forcing past and present, history and mythology to collide.

As it turns out, The Gate To Futures Past is an entirely fitting title for the book, but where that gate leads, and what it will take to pass through, is something of a shock. The final chapters are some of the most sorrowful in a series that previously gone to some dark places. It's appropriately mind blowing, with some really cool revelations about the Clan, but it really leaves me wondering where the story will wrap up. It's not that Czerneda has written herself into a box, but she's cut off a lot of possibilities, and I'm excited by the fact that I can't see the future.


Disclaimer: I received a complimentary ARC of this title from the publisher in exchange for review consideration. This does not in any way affect the honesty or sincerity of my review. 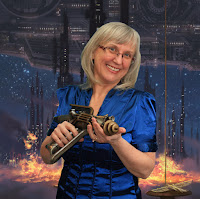 Since 1997, Canadian author/former biologist Julie E. Czerneda has shared her boundless curiosity about living things through her science fiction, published by DAW Books, NY. Recently, she began her first fantasy series: Night’s Edge with A Turn of Light, winner of the 2014 Aurora Award for Best English Novel. A Play of Shadow followed, winning the 2015 Aurora. While there’ll be more fantasy, Julie’s back in science fiction to complete her Clan Chronicles series. Reunification #1: This Gulf of Time and Stars, came out in 2015. #2: The Gate to Futures Past will be released this September. Volume #3: To Guard Against the Dark, follows October 2017. An award-winning editor as well, Julie’s latest project is editing the 2017 Nebula Awards Showcase, a singular honour. Meet Julie at Acadia’s Dark Sky Festival, Bar Harbor, Maine this September and at Hal-Con, Halifax, this November. For more, please visit www.czerneda.com.

The Clan Chronicles is set in a far future where a mutual Trade Pact encourages peaceful commerce among a multitude of alien and Human worlds. The alien Clan, humanoid in appearance, have been living in secrecy and wealth on Human worlds, relying on their innate ability to move through the M’hir and bypass normal space. The Clan bred to increase that power, only to learn its terrible price: females who can’t help but kill prospective mates. Sira di Sarc is the first female of her kind facing that reality. With the help of a Human starship captain, Jason Morgan, himself a talented telepath, Sira must find a morally acceptable solution before it’s too late. But with the Clan exposed, her time is running out. The Stratification trilogy follows Sira’s ancestor, Aryl Sarc, and shows how their power first came to be as well as how the Clan came to live in the Trade Pact. The Trade Pact trilogy is the story of Sira and Morgan, and the trouble facing the Clan. Reunification will conclude the series and answer, at last, #whoaretheclan.
And what will be the fate of all.

Courtesy of the good folks at DAW, I have 1 mass market of A GULF OF TIME AND STARS and 1 hardcover of GATE TO FUTURES PAST to offer not just one, but two lucky winners.
US/Canada only.

Of course, if you'd like to increase your odds and seriously stack your shelves, there's also a tour-wide giveaway going on for all 8 books in the CLAN CHRONICLES.