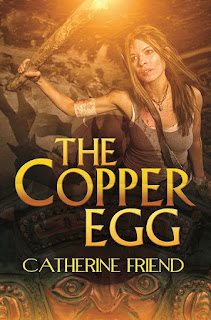 Although it certainly has its flaws, The Copper Egg was still an exciting diversion that played into my love for archaeological treasure hunts. There's a great novella at its heart, which would have been a lot more satisfying if Catherine Friend hadn't so obviously tried to pad it out.

What works about it? Well, for one, the Peruvian history, the archaeological details, and the treasure hunt itself are rock-solid. Not only did this introduce me to a new culture, but it added a new destination to my bucket list of places to visit. Second, Claire and Sochi were fantastic leading ladies, more than capable of shepherding the adventure along, and their romance added some much-needed tension. Finally, the narrative itself was strong (even if it did need one more editorial pass), allowing the humor, the adventure, and the romance to shine through.

What didn't work? Like I said, it really needed one more editorial pass to catch the continuity errors (including a key one early one that really confused me), and to wrap up loose ends (including a prominent gap in the climax). As for that padding issue, Friend really does try to do too much here, adding some unnecessary betrayals and double-crosses into the mix, and incorporating a megalomaniac villain who seems like he fell out of a bad James Bond story. Finally, and this is a general complaint about the genre, but far too many discoveries either happen by accident or for supernatural means, all but negating the archaeological skills involved.

All complaints aside, this was a fun read that kept me engaged, and which had me sitting on a rock by the water for a few hours this weekend, anxious to see how it all ended. What's more, The Copper Egg itself made for a nice MacGuffin that helped hold the plot together, but which never overwhelmed the human element of Claire and Sochi.

Disclaimer: I received a complimentary ARC of this title from the publisher in exchange for review consideration. This does not in any way affect the honesty or sincerity of my review.
adventure archaeology book review Catherine Friend lgbt