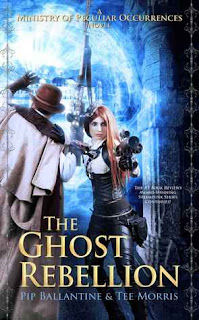 The Ministry of Peculiar Occurrences is, far and away, my favorite saga of alternative history, sci-fi steampunk, and espionage adventure. Strong characters, creative world (and history) building, and some really inventive mash-ups of monsters and mechanicals have made each book more interesting than the last.

With their fifth full-length tale, The Ghost Rebellion, Pip Ballantine & Tee Morris have upped the ante once again, thrusting Books & Braun into the battlefields of India, and dropping Brandon & Bruce into the cold depths of Russia. It's the first time in the series that we've had a pair of stories working in parallel, with separate missions advancing the plot, and it makes for a more well-rounded story. Combined with some darker interludes that both open up the story and reveal some of the connections between the previous books, this may be the series' strongest entry in terms of narrative.

Of course, it's the characters who make this series work so well, and it's their ongoing development that makes each new book a must-read. I really like where Books & Braun are in their relationship, with that perfect blend of affection and good-natured aggravation between them. They're both capable of carrying the story on their own, but the way they play off each other really makes the story work. As for Brandon & Bruce, they began to evolve out of the mismatched, awkward partner role in the last book, and they really get a chance to take on some of the heroics here. They're still responsible for some of the most consistently amusing aspects of the story, but they also get some deeper, more significant moments.

The story really kicks it up a notch in terms of technology this time around as well. The 'ghosts' of the title are really victims of an abused æthergate technology that was dangerously unstable to begin with, and there are some chilling implications to their rather un-tethered fates. While the tools and weapons in the series just keep getting bigger and badder, nothing tops the scene where Braun so gleefully takes control of a giant mech, basically flipping switches and slapping at buttons to see what happens, until she hits the self-destruct and initiates the ride of her life. It's not just all fun and adventure, however - Ballantine & Morris really get into the whole politics and culture of India at the time, never shying away from the racism, segregation, and exploitation that came with being part of the British Empire.

Although this is clearly not the last we'll see of Books & Braun, the Ministry itself, or the House of Usher, Ballantine & Morris have spared us the anxiety of another cliffhanger this time around. There are a lot of story pieces still to be picked up - not the least of which are Books' dark history, the eventual fate of Dr. Jekyll, and the tease of Ragnarök - so hopefully the series will keep on rolling.

As a final note, if you're new to the series, do yourself a favor and check out Phoenix Rising first. You won't regret it.


Disclaimer: I received a complimentary ARC of this title from the author in exchange for review consideration. This does not in any way affect the honesty or sincerity of my review.
adventure book review Pip Ballantine sci-fi steampunk Tee Morris