Just 1 new review title this week, but since it's an October release, it doesn't really count against my summer scheme to clear out the review shelves.

Long after the Towers left the world but before the dragons came to Daluça, the emperor brought his delegation of gods and diplomats to Olorum. As the royalty negotiates over trade routes and public services, the divinity seeks arcane assistance among the local gods.

Aqib bgm Sadiqi, fourth-cousin to the royal family and son of the Master of Beasts, has more mortal and pressing concerns. His heart has been captured for the first time by a handsome Daluçan soldier named Lucrio. in defiance of Saintly Canon, gossiping servants, and the furious disapproval of his father and brother, Aqib finds himself swept up in a whirlwind romance. But neither Aqib nor Lucrio know whether their love can survive all the hardships the world has to throw at them.

For Father's Day, my wife got me an Indigo gift card, so I made good use of that. Stephen King is always best enjoyed as a pocket paperback (the same way I discovered him long ago); The Dinosaur Lords I want to re-read and take the time to enjoy before picking up the next book; Max Gladstone is an author I've been meaning to read for a while now; and A Crown for Cold Silver is one of those books I wasn't in the right mood to review as an ARC, but which I want to enjoy in paperback. 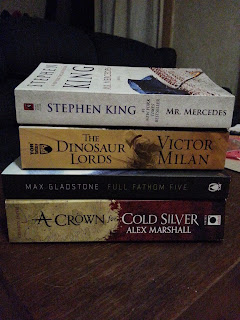 Finally, I did pick up a pair of Kindle titles that I am sure you'll be seeing on a WTF Friday sometime soon.


Berzerkoids by MP Johnson
I'm a little late in getting to this, but looking forward to stories "so shockingly, oozingly awesome, you just have to read ‘em all!"

Sherlock Holmes and the Servants of Hell by Paul Kane
Technically, this one is a bit deeper into the review queue, but I've waited long enough. I've been waiting for this for over a year, and it's time to see Holmes meet Hellraiser.

What's topping your shelves this week?
epic fantasy giveaway Mailbox Monday sci-fi Stacking The Shelves thriller What Are You Reading?