The shelves got another much-needed reprieve this week, with just 1 new review title. Besides, I had already pre-ordered it anyway. :)

When Saffron Coulter stumbles through a hole in reality, she finds herself trapped in Kena, a magical realm on the brink of civil war.

There, her fate becomes intertwined with that of three very different women: Zech, the fast-thinking acolyte of a cunning, powerful exile; Viya, the spoiled, runaway consort of the empire-building ruler, Vex Leoden; and Gwen, an Earth-born worldwalker whose greatest regret is putting Leoden on the throne. But Leoden has allies, too, chief among them the Vex’Mara Kadeja, a dangerous ex-priestess who shares his dreams of conquest.

Pursued by Leoden and aided by the Shavaktiin, a secretive order of storytellers and mystics, the rebels flee to Veksh, a neighboring matriarchy ruled by the fearsome Council of Queens. Saffron is out of her world and out of her depth, but the further she travels, the more she finds herself bound to her friends with ties of blood and magic.

Can one girl – an accidental worldwalker – really be the key to saving Kena? Or will she just die trying?


Berzerkoids by MP Johnson
I'm a little late in getting to this, but looking forward to stories "so shockingly, oozingly awesome, you just have to read ‘em all!"

Sherlock Holmes and the Servants of Hell by Paul Kane
Technically, this one is a bit deeper into the review queue, but I've waited long enough. I've been waiting for this for over a year, and it's time to see Holmes meet Hellraiser.

Touchstone by Melanie Rawn
This week's paperback hike/park/beach read is the first in Rawn's latest series. With the mass market paperback of the second book coming soon, it's time to get reading. 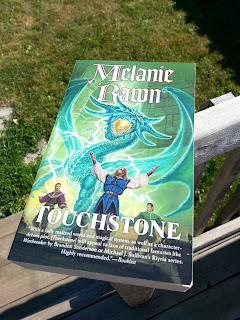 What's topping your shelves this week?
bizarro epic fantasy horror Mailbox Monday Stacking The Shelves What Are You Reading?