Waiting on Wednesday: The Librarians and The Lost Lamp by Greg Cox

on March 02, 2016
"Waiting On" Wednesday is a weekly event, hosted by Jill over at Breaking the Spine, that spotlights upcoming releases that we're eagerly anticipating. 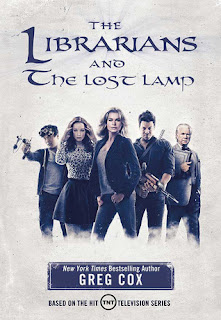 The Librarians and The Lost Lamp by Greg Cox
Expected publication: October 11th 2016 by Tor Books

The Librarians is one of the biggest new hits on cable. Spinning off from a popular series of TV-movies, the TNT series begins its second season this Fall. The Librarians and the Lost Lamp is the first in a series of thrilling all-new adventures that will delight fans of the TV series and movies.

For thousands of years, the Librarians have secretly protected the world The Librarians from dangerous magical relics and knowledge, including everything from Pandora’s Box to King Arthur’s sword.

Ten years ago, Flynn Carson was the only living Librarian. When the ancient criminal organization known as the Forty steals the oldest known copy of The Arabian Nights by Scheherazade, Flynn is called in to investigate. Fearing that the Forty is after Aladdin's fabled Lamp, Flynn must race to find it before the Lamp's powerful and malevolent djinn is unleashed upon the world.

Today, a new team of inexperienced Librarians, along with Eve Baird, their tough-as-nails Guardian, is investigating an uncanny mystery in Las Vegas when the quest for the Lamp begins anew . . . and the fate of the world hangs in the balance.


The Librarians is one of my biggest guilty pleasures. It doesn't seem to get the same level of hype (or the respect) that so many other genre shows do, but I enjoy it immensely. It has the perfect blend of tongue-in-cheek humor, history, and adventure - and I'm anxious to see what Cox can do with the literary equivalent of an unlimited budget.
adventure Greg Cox The Librarians Waiting On Wednesday