Waiting on Wednesday: A Blade of Black Steel by Alex Marshall

on March 09, 2016
"Waiting On" Wednesday is a weekly event, hosted by Jill over at Breaking the Spine, that spotlights upcoming releases that we're eagerly anticipating. 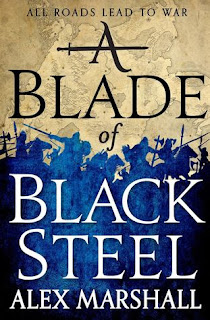 A Blade of Black Steel by Alex Marshall
Expected publication: May 26th 2016 by Orbit

The sequel to Alex Marshall's A Crown for Cold Silver, an outstanding, game-changing epic adventure featuring an unforgettable female warrior.

After five hundred years, the Sunken Kingdom has returned, and brought with it a monstrous secret that threatens to destroy every country on the Star.

As an inhuman army gathers on its shores, poised to invade the Immaculate Isles, the members of the Cobalt Company face an ugly choice: abandon their dreams of glory and vengeance to combat a menace from another realm, or pursue their ambitions and hope the Star is still there when the smoke clears.

Five villains. One legendary general. A battle for survival.


I picked up the first book of this series as a digital ARC, but just wasn't in the right mood to appreciate it. I could see enough potential that I went out and bought the hardcover, but I haven't found time for it yet. Of course, with the revelation that Alex Marshall is actually Jesse Bullington, I'm extra motivated to make time soon.
Alex Marshall epic fantasy Jesse Bullington Waiting On Wednesday