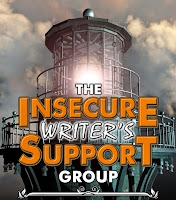 The Insecure Writer's Support Group is a once-monthly blog hop aimed at sharing our doubts and concerns, while encouraging one another with assistance and guidance. As the lighthouse image suggests, it’s a beacon in the dark and a safe haven for insecure writers of all kinds!

While I'm still feeling a but insecure about the whole waiting game, with my book floating in limbo, being read/judged/evaluated as part of two open-submission windows, I'm choosing not to dwell on it.

Instead, I've chucked all expectations, given myself permission to let loose, and and have started working on a few short stories that I'll likely self-publish under a pen-name. With my novel, I found that I was far too concerned with what other people might think or how they might react, and I fear that might have held me back a bit. I know I absolutely cannot hold back with my next novel - it goes to some really dark places - so I'm trying an exercise in self-expression.

I just want to have some fun, delve deep into the extremes of my imagination, and put some stuff out there without a care for what people might think. To bizarre? Too gory? Too twisted? Too kinky? Too weird? Too messed up? People can think whatever they want about that other guy, and I can sort of disconnect myself from those reactions while I pay attention to what people enjoy about the stories.
Insecure Writer's Support Group