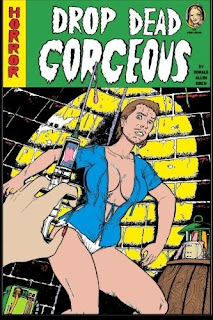 While it opens with a scene that's reminiscent of a Criminal Minds episode, Drop Dead Gorgeous quickly veers into something more akin to a Roger Corman movie, before reaching a conclusion that could have come straight out of the Twilight Zone.

What Donald Allen Kirch weaves here is a twisted story of revenge, medical experimentation, and outright insanity that only gets more intense as it races along. Here we have a young man who wakes up in a strange basement, surrounded by stacks of rotting bodies, bound and gagged, with no memory of how he got there. The revelation that his kidnapper is an impossibly beautiful woman is certainly an interesting twist, but her backstory is the biggest twist of all.

You see, 7 years ago Eve Doe - the world's most perfect woman - was a man known by the name of Steve Kane. Forget the usual horror cliches, because Eve is neither a crazy drag queen nor a tormented transsexual. Instead, she is a perfect punishment, a genetic life sentence for cheating on Steve's mad scientist wife.

That's about as much as I want to say about the plot, as you really need to discover it for yourself. It's the interplay between Ray and Eve, between captive and captor, that is at the heart of the story. Kirch establishes them both very well, allowing their own fears and failings to play off one another. It's not often a book like this successfully manages to switch the roles of monster and victim so many times so successfully, but be prepared to have your assumptions challenged.

Drop Dead Gorgeous is a book that goes to some very dark places, with some of the most imaginative scenes of torture and transformation that I've encountered in some time. It's not the book I expected it to be, and the reading experience is that much better for it.


Disclaimer: I received a complimentary ARC of this title from the author in exchange for review consideration. This does not in any way affect the honesty or sincerity of my review.
book review Donald Allen Kirch gender horror