on February 17, 2016
"Waiting On" Wednesday is a weekly event, hosted by Jill over at Breaking the Spine, that spotlights upcoming releases that we're eagerly anticipating. 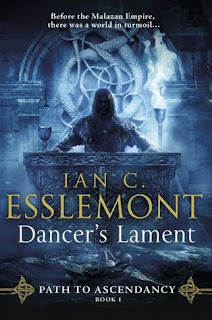 For ages warfare has crippled the continent as minor city states, baronies, and principalities fought in an endless round of hostilities. Only the alliance of the rival Tali and Quon cities could field the resources to mount a hegemony from coast to coast -- and thus become known as Quon Taili.

It is a generation since the collapse of this dynasty and regional powers are once more rousing themselves. Into this arena of renewed border wars come two youths to the powerful central city state that is LiHeng. One is named Dorin, and he comes determined to prove himself the most skilled assassin of his age; he is chasing the other youth -- a Dal Hon mage who has proven himself annoyingly difficult to kill.

Li Heng has been guided and warded for centuries by the powerful sorceress known as the "Protectress" and she allows no rivals. She and her cabal of five mage servants were enough to repel the Quon Tali Iron Legions -- what could two youths hope to accomplish under their stifling rule?

Yet under the new and ambitious King Chulalorn the Third, Itko Kan is on the march from the south. He sends his own assassin servants, the Nightblades, against the city, and there are hints that he also commands inhuman forces out of legend.

While above all, shadows swirl oddly about Li Heng, and monstrous slathering beasts seem to appear from nowhere to run howling through the street. It is a time of chaos and upheaval, and in chaos, as the young Dal Hon mage would say, there is opportunity.


With 6 side entries in the Malazan series under his belt, filling in gaps and fleshing out the main story from Steven Erikson, it's Esslemont turn to reach back and introduce more of the backstory/history behind the Malazan Book of the Fallen.
Canadian epic fantasy Ian C. Esslemont Waiting On Wednesday