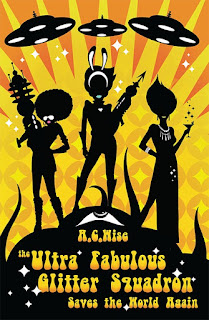 While it initially appears to be nothing more than a pulp adventure tale filled with comically flamboyant superheroes, The Ultra Fabulous Glitter Squadron Saves the World Again is actually a book with a surprising amount of diversity and depth. A.C. Wise has crafted a layered series of interconnected stories with as much heart and soul as action and drama.

The Ultra Fabulous Glitter Squadron itself is a group of women from across the spectrum of gender and sexuality. It's a level of diversity that should feel awkward and forced, but Wise pulls if off smoothly but giving each of them - with the exception of the mysterious pain loving M - a heartfelt origin story. Outcasts, loners, and victims one and all, they've found a common cause in embracing the glitter and glam of drag, choosing to become the kind of heroes the world so desperately needs.

As for that heroism, it pits them against everything from gorilla men on Mars, to tentacle monsters from beneath the sea, space eels, killer scarabs, winged harpies, demons, ghosts, and massive monstrous beetles from deep beneath the Earth. There are mad scientists along the way, a crisis aboard Air Force One, run-of-the-mill bullies at a roller rink, and even a gang of superhero strippers known as the G-String Men. It all sounds silly, pulpish, and over-the-top, but the strength (and depth) of the characters keeps it all grounded.

Beneath all the monstrous mayhem and superhero silliness lies a heart of shared pain, suffering, and hurt. Wise makes us care about these women, sympathize with their struggles, and root for their personal triumphs as much as their professional ones. It's not in-your-face, but the message here about accepting and embracing your true identity is one that I'd hope any reader can relate to. My only complaint would be that the collection ends just as Wise introduces some real tension within the group, putting Bunny and Penny at odds with one another, but that just means I'll be on the hook for the next chapter.


Disclaimer: I received a complimentary ARC of this title from the author in exchange for review consideration. This does not in any way affect the honesty or sincerity of my review.
A.C. Wise book review gender sci-fi superheroes