A Fresh Take on Superpowers (a guest post by Cy Wyss)

on February 01, 2016
A Fresh Take on Superpowers
a guest post by Cy Wyss

After 80 years, how can anyone write about a superhero and keep it fresh and new? It sometimes seems like every power under the sun has been investigated. But what about circumscribed superpowers? By that I mean a power whose extent is fixed and known. In contrast, how powerful is Superman? The answer is, he’s always as powerful as he needs to be for the story.

There’s a scene in The Simpsons where the family is watching Knight Boat, a twist on the 80s show Knight Rider with David Hasselhoff. The bad guys are getting away…but then there’s a canal so Knight Boat can follow. Homer mourns, “Aw, there’s always a canal.” Bart pipes up, “Or an inlet.” Lisa adds, “Or a fjord.” That’s of course the problem with superheroes. They always have the strength to deal with the challenges they’re faced with, or some deus ex machina allows them to use their power to win.

Alternatively, I was interested in powers that have an a priori fixed extent. In Dimorphic, I posit the superpower of being able to use two bodies. Whenever the main character, Judith, falls asleep, she switches between her own and her twin brother’s braindead body. Other than that, Judith and her brother Ethan are normal people. True, Ethan is a gymnast and Parkour expert, but he ultimately can’t do anything that fit and practiced men can’t do. So the power is beyond what anyone has, but is relatively circumscribed. What does it boil down to? I think it boils down to information transfer. What one twin knows before they go to sleep, the other one wakes up knowing. No need for a cell phone.

What does that boil down to? The element of surprise. If one twin goes to sleep in the company of bad guys, the other can come and rescue them. And it would be a surprise, for how could the bad guys possibly prepare for the information transfer capabilities of the twins? On the other hand, all they have to do to thwart the superpower is put a bag over their captive’s head. This is a hallmark of a limited superpower. Like ordinary heroes, more guile is required. Of course, since my stories are about the hero, there needs to be some way they win. But with a limited superpower the stories depend less on the superpower than one might at first think. It all comes down to human resourcefulness. Ultimately, as Judith finds out, being a superhero is all about hanging in there when the going gets tough and making the most of your limited, human capabilities. 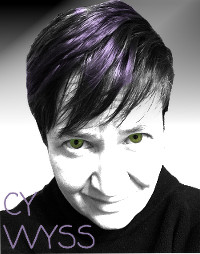 I live and write in the Indianapolis area. After earning a PhD in Computer Science in 2002 and teaching and researching for seven years, I’ve returned to the childhood dream of becoming an author. I better do it now because I won’t get a third life.

Behind me, I have a ton of academic experience and have written about twenty extremely boring papers on query languages and such, for example this one in the ACM Transactions on Databases. (That’s a mouthful.)

Now, I write in the mystery/thriller/suspense genres and sometimes science fiction. I know for some people databases would be the more beloved of the options, but for me, I finally realized that my heart wasn’t in it. So I took up a second life, as a self-published fiction author.

Online, I do the Writer Cy cartoon series about the (mis)adventures of researching, writing, and self-publishing in today’s shifting climate. I also love to design and create my own covers using GIMP.

It's easy to become a superhero.

First, discover a superpower. It might take a while to get used to, though --- especially if it's something as weird as being your twin brother half the time.

Second, recruit a sidekick. Or, two. It'd be nice if they weren't a pyromaniacal sycophant and a foul-mouthed midget, but you get what you get.

Third, and most important, hire a mentor --- preferably not a vicious mobster with a God complex, however, this may, realistically, be your only choice.

Finally: go forth and fight crime. Try not to get shot, beaten, tortured, or apprehended in the process.


This is a giveaway hosted by Partners In Crime Virtual Book Tours for Cy Wyss. There will be 1 winner of 1 $25 Amazon.com US Gift card. The giveaway begins on Jan 24 and runs through Feb 29, 2016.