Checkmate Ever After by Lex Chase
Together, Rook and Garth form Checkmate, a daring super duo that keeps Axis City safe from a rogue’s gallery of nefarious villains, dastardly masterminds, and a coalition of calamity. But by day, they’re a couple of broke losers who can barely afford a burger and navigating a weird thing called a relationship.

Red Hourglass by Scarlet Risque
The first in the Hourglass series, Red Hourglass is a dark coming-of-age thriller romance that explores themes of identity, dominance, and submission.  A fast paced read with strong female protagonists. The novel is set in today's globalized world, and infused with undercover agents, poker, tango, and a mix of Eastern and Western philosophy.

The Dragon Round by Stephen S. Power
A swashbuckling adventure with a dark side for fans of George R.R. Martin and Naomi Novik—when a ship captain is stranded on a deserted island by his mutinous crew, he finds a baby dragon that just might be the key to his salvation…and his revenge.

The Waking Engine by David Edison
Late of Manhattan, Cooper finds himself in a City that is not what it once was. The gateway to True Death is failing, so that the City is becoming overrun by the Dying, who clot its byzantine streets and alleys . . . and a spreading madness threatens to engulf the entire metaverse.

The Hammer and the Blade by Paul S. Kemp
Robbing tombs for fun and profit might not be a stable career, but Egil and Nix aren’t in it for the long-term prospects. Egil is the hammer-wielding warrior-priest of a discredited god. Nix is a roguish thief with just enough knowledge of magic to conjure up trouble.

The Iron Ship by K.M. McInley
The order of the world is in turmoil. An age of industry is beginning, an age of machines fuelled by magic. Sprawling cities rise, strange devices stalk the land. New money brings new power. The balance between the Hundred Kingdoms is upset. For the first time in generations the threat of war looms. 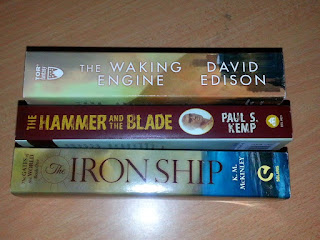 Reawakening by Amy Rae Durreson
For a thousand years, since their defeat of the Shadow at Eyr, the dragons have slept under the mountains. Now their king, Tarnamell, has woken. Driven mad by loneliness, he hurls himself south until he finds and tries to claim the Alagard Desert. Unfortunately, the desert already has a guardian spirit, and he doesn't want to share. Amused by the cocky little desert spirit, Tarn retreats, planning to return in human form.

Last Song Before Night by Ilana C. Myer
A high fantasy following a young woman's defiance of her culture as she undertakes a dangerous quest to restore her world's lost magic. The Red Death's return can mean only one thing: someone is spilling innocent blood in order to master dark magic. Now poets who thought only to gain fame for their songs face a challenge much greater: reclaim their legacy and reopen the way to the Otherworld.