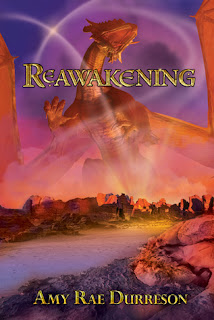 It's been a thousand years since dragons last roamed the land, a millennium in which their heroic defeat of the Shadow has become a thing of myth and legend. As the first dragon to awaken from his long slumber, Tarnamell is devastated to find his hoard cold and empty, absent of the love and laughter that once filled its halls. When his curious search of this new age reveals an upstart desert spirit where once there was an ocean, he decides to return in human form and claim the spirit and his desert for his new hoard. Along the way he joins a caravan of 'sparkly' traders, adding them to his hoard as well, and journeying with them in search of Alagard.

For an epic fantasy complete with dragons, upstart empires, dark forces, and hordes of the undead, love is the predominant theme here. A dragon's hoard is not an assembly of trinkets and trophies gathered out of greed, but of the emotions and memories attached to them. Tarn doesn't seek out Gard to dominate or control him, but to love him, protect him, and add the people he protects to his hoard. Love is a predominant theme among the caravan as well, despite (or perhaps because of) their 'sparkly' romances being of the same-sex variety. On that note, Durreson certainly doesn't hold back on exploring those relationships, with some rather explicit passages scattered throughout, but they do serve to further develop the characters while propelling the story forward.

The pacing here is a bit uneven, with an extended lull for character building at the heart of it, but that's really my only complaint. The world building is very well done, and the mythology (or, from Tarn's perspective, history) nicely layered. There are numerous races and cultures at play here, and if our exploration of politics is a bit weak, it does seem to be more of a focus in the sequel, Resistance. The Shadow itself is a fearsome force, wisely kept shadowy and vague. The armies of undead he throws at the caravan are legitimately terrifying, and his control of the sands is a serious threat. Fortunately, the caravan has a dragon on its side, who isn't shy about shifting back to his true form and taking them under his wing (literally) as he burns down their foes.

Most importantly, Durreson knows how to spin a tale, with a narrative style that flows naturally, and dialogue that is sharp and witty. Her characters come alive, allowing us to easily become wrapped up in their fates. Reawakening is definitely for mature readers, but it still retains that wondrous feel of a classic fantasy.


Disclaimer: I received a complimentary copy of this title from the publisher in exchange for review consideration.This does not in any way affect the honesty or sincerity of my review.
Amy Rae Durreson book review epic fantasy lgbt