on December 18, 2015
Every once in a while, as the mood strikes me, I like to indulge in those titles that are a bit odd . . . a bit different . . . a bit bizarre . . . and a bit freaky. These are books that don't always get a lot of press, and which rarely benefit from any prominent retail shelf space. 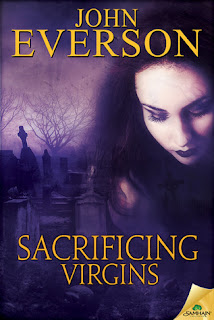 Despite having purchased several of John Everson's novels, Sacrificing Virgins actually proved to be my first taste of his work. Having finished it last night, I must say that it left me with one very important question - what the hell I was waiting for?

“She Found Spring” is a beautiful, yet sadly haunting sort of tale, a classic ghost story centered around the turning of the seasons. "Bad Day” is a terrifying, apocalyptic sort of tale that starts out with a bit of morbid humor, but which descends into hopeless terror as the plague of Luna Roaches begin breeding inside human skulls.

“The Pumpkin Man” and “The Tapping” are stories where you know what's going on, and can guess the ending from the start, but they're so well told that you're content to enjoy the read. Both are distinguished by the uniqueness of their narrators, the creepiness of the atmosphere, and the ghost-story chills of the plot. “The White House” is a similar sort of tale where you can guess at the ending from page one, but it's the slow build of the tension, and the gradual reveal of the house's sins that make it so powerful.

"The Hole To China” is a perfect closer to the collection, as beautiful and sadly haunting as the story that opened it. A tale of escape from the all-too-real horrors of domestic abuse, it relates the simple story of a boy digging his way to China, and the kindly woman next door who offers him a special shovel, along with some increasingly unsettling observations.

Make no mistake, Sacrificing Virgins is not for everyone, but that's precisely why I enjoyed it so much. I have barely scratched at the surface here, but this is a book that had me covering my eyes, turning my head aside, and reading almost tentatively at times. Some of it is beautiful, and some of it is shocking, but it's all powerful.